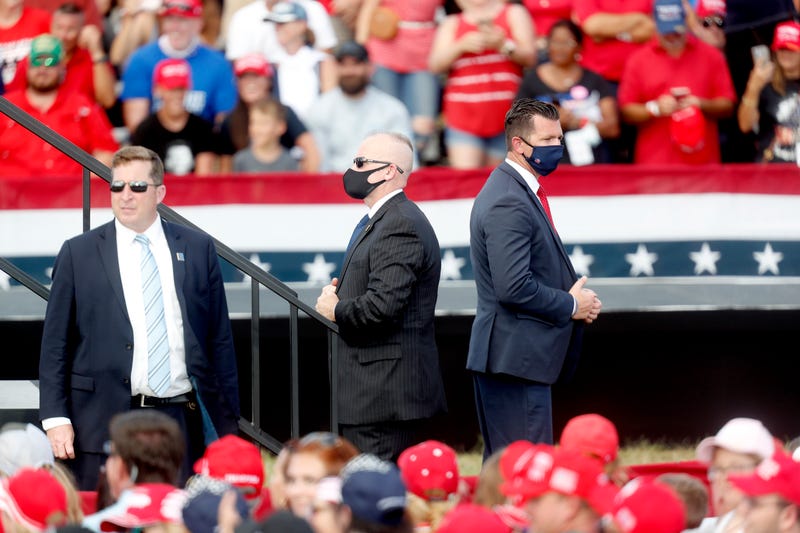 Secret Service is seen during President Donald Trump campaign speech just four days before Election Day outside of Raymond James Stadium on October 29, 2020 in Tampa, Florida. With less than a week until Election Day, Trump and his opponent, Democratic presidential nominee Joe Biden, are campaigning across the country. Photo credit Octavio Jones/Getty Images
By David Caplan

NEW YORK (1010 WINS) -- More than 130 Secret Service officers who have been traveling with President Trump been ordered to isolate or quarantine because they tested positive for coronavirus or had close contact with a co-worker who tested positive for the potentially-deadly virus, the Washington Post reported Friday, citing unnamed sources.

Ten percent of the Secret Service's core security team has been sidelined, according to the report.

The positive cases has put a strain on the officers who continue to work: they've been forced to not take days off and work longer hours, according to the report.

“Being down more than 100 officers is very problematic,” a former senior Secret Service supervisor told the Post. "That does not bode well for White House security."

The Secret Service declined to comment on the report.

A series of Trump rallies the president had before the election are believed to be partly linked to the positive cases.

The agency is also looking into whether the cases are not linked to traveling to the rallies, but to being at the White House, where several staffers have tested positive.