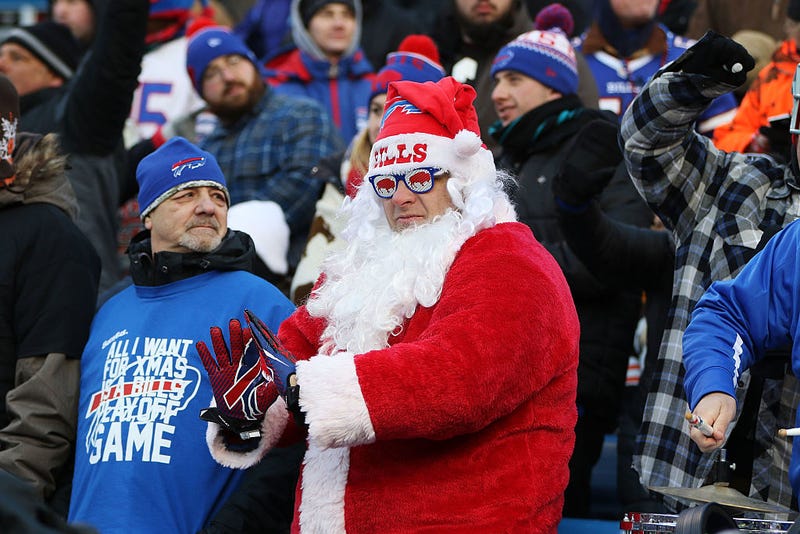 Get ready for a triple-header of football on Christmas day this year.

Appearing on the SalSports…..and Stuff podcast, NFL Vice President of Broadcasting Mike North confirmed that the league will play the three games on Christmas Day this season, which falls on a Sunday.

The majority of rest of that week’s schedule will be played on Saturday, December 24, Christmas Eve.

“We will take the bulk of our games, the Sunday afternoon games on CBS and FOX, one o’clock and four o’clock Eastern, we’ll move those to Saturday,” North told me.  “So we’re going to play most of our games on Saturday, December 24.  We'll have our usual one o'clock window, six or eight, ten games, whatever it is. We’ll have our usual four o’clock window, three, four, or five games there. We’ll play on Saturday night on the NFL Netork on Christmas Eve and then when we get to Sunday, Christmas Day, we’ll have a triple-header. We’ll play one game on CBS in the afternoon, one game on FOX in the afternoon, and our regular Sunday night game on NBC.

Whereas the NBA traditionally plays on Christmas Day, the NFL typically only does when it falls on a Friday, Saturday, Sunday, or Monday, and has never played more than two games on one Christmas Day, including last year (Saturday), 2017 (Sunday), and 2016 (Monday).

“Christmas when it falls on an NFL game day we've had a lot of success there, all due respect to our friends at the NBA,” North said. But when we can play football on Christmas it has proven to be something our fans are interested in. We had Minnesota - New Orleans a couple years ago. That came to 20 million viewers. We had Cleveland - Green Bay last year, that game did 30 million viewers. It was followed by Indy - Arizona on the NFL Network, that one performed well. Our fans are telling us that we know they watch on Thanksgiving.  They're happy to watch on Christmas, too.”

North said the league will play its usual Sunday slate the following Sunday, on New Year’s Day.  The traditional New Year’s Day college bowl games will be moved to either Saturday, December 31, which is New Year’s Eve, or to Monday, January 2.

We know the league will also have three Thanksgiving day games. One in the early afternoon, one in the late afternoon, and one in prime time. So, conceivably, a team could play on Thanksgiving, Christmas, and New Year's this season.  That's exactly what happened to the Pittsburgh Steelers in 2016. They played at the Indianapolis Colts on Thanksgiving night, then home to the Baltimore Ravens on Christmas Day and home to the Cleveland Browns on New Year's Day. The Steelers won all three games.

The Bills have played two of the past three seasons on Thanksgiving: Winning in Dallas, 26-15, against the Cowboys in the late afternoon game in 2019, and then beating the Saints in New Orleans, 31-6, in the Thanksgiving night game this past season.

North made it clear they are a possibility to play on that day again. “The Bills have been on Thanksgiving quite a bit recently,” he said. “They do play Detroit on the road, and somebody's got to go to Detroit on Thanksgiving. It could be Buffalo, it could be Miami [Dolphins], it could be a cross-flex where we take a FOX game and we make it Chicago [Bears] or Green Bay [Packers], or something like that. There are options, but Buffalo has got to be one of them.”