Justin Bieber has never been as “Honest” as he is right now. There's a very good reason for that.

LISTEN: Justin Bieber takes us inside his new single 'Honest' in an Audacy Check In

Bieber took part in an Audacy Check In with Audacy’s Kenzie K as we caught up with him in the middle of his Justice tour. “I have a while left on the tour, but it’s going really well,” Justin told Kenzie. “I’m able to spend my off days kind of hubbing out of different spots, which has been really cool.”

We caught up with Justin while he was back at home to rest for a day. He’ll be flying out the next day in order to get back on the tour, which is something he’s not usually able to do while on the road. “It’s been a lot more restful than some of the other tours, which has been nice,” he said.

Bieber is fresh off the release of his new single “Honest,” which features a collaboration with Don Toliver. The two have developed a strong working relationship with one another over time, but first got acquainted through a mutual friend. “I actually heard of him through Travis Scott,” Bieber said. “I was at his house and he was like ‘you’ve got to check out Don Toliver. He’s this new artist [and] his melodies are crazy.”

“Fast forward and I end up organically meeting him through… I think it was Skrillex,” Bieber added. “We did a song together and then kind of developed a relationship and just have kept making music over the past year. It’s been really nice, I’m a huge fan.” 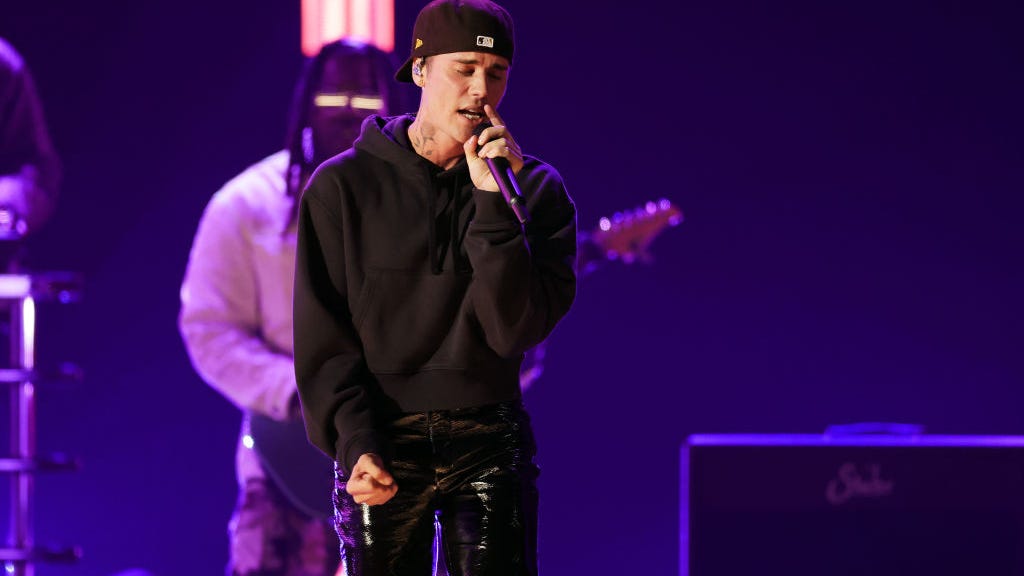 The decision to use “Honest” as the song title was deliberate on Bieber’s behalf as he used it as an opportunity to open up to his fans. “I think the goal there was kind of to show my personality,” he said. “I’m a really silly guy, and life is kind of hard sometimes, so to be silly shows other people they can not take themselves too seriously sometimes.”

Being able to fuse comedy and music is not something Bieber usually does with his music. While he described the process of it as “really fun,” he also used it as a nod to his influences.  “[I was] definitely inspired by, back in the day, Soulja Boy had a bunch of really silly songs,” he said. “He had this song called ‘Hey You There.’ It was that kind of stuff that just kind of inspired me to be silly on the song.”

To wrap up his Check In, Bieber took part in a game of “Brutally Honest” where he had to, well, be brutally honest on a variety of topics. First up, what’s the hardest part of being on tour?

“The hardest part of tour is probably staying healthy because you’re traveling so much,” he said. “Just keeping your body in good shape, it’s an hour and a half show so the sustainability of it all is probably the hardest part.”

Bieber then touched on his use of the French language, specifically during his “yummy time” with his wife Hailey Bieber. “I don’t know if I’ve spoken French during our yummy time,” he exclaimed with a hearty laugh. “But I’m sure she wouldn’t mind it! That’s a good call, maybe I’ll try that.”

Speaking of Hailey… Justin was asked what his reaction would be if someone made a joke about his wife that he didn’t like. Specifically, if it were at an awards show like the situation that developed at the Oscars with Will Smith. “I think when you’re trying to protect your wife, I think sometimes you can do things that are out-of-pocket. But it’s hard to say in the moment,” Bieber said. “There’s definitely layers, especially to the situation you’re talking about” he added with a smile.

Watch our full Audacy Check In with Justin Bieber above and be sure to listen to Audacy’s Justin Bieber Radio where you’ll find his brand new single “Honest,” his biggest hits, and much more.