At the beginning of 2021, Olivia Rodrigo dove into the new year with a meteoric hit single that reached the top of the charts so quickly that mega-stars like Taylor Swift and Kim Kardashian were literally singing the praises of and endorsing “drivers license,” right after its debut.

As Rodrigo dives into conversation with RADIO.COM’s Julia, the 18-year-old, over-night superstar fills us in on what the success has felt like for her thus far, what’s next in her musical journey, and finally clears up the tea that has been brewing since the song's debut.

“It doesn’t actually register in my brain as real life,” jokes Olivia when asked how she is processing the success of her track that has been charting at No. 1 for seven weeks now. “Obviously it's every songwriter’s dream to write a song that’s really…vulnerable and passionate and have it be well-received,” shares the artist.

Since the debut of her song, Olivia has not only nabbed the well-deserved attention of the Pop music industry but has also morphed into a pop culture hot topic, that even Saturday Night Live had commentary on.

Rodrigo tells us, “I think being made fun of and parodied on SNL is the biggest compliment in the whole world.” The singer continues to gush as she tells us she couldn’t believe that the variety show spun her whole record into an entire sketch that featured Pete Davidson, Rodrigo’s “biggest celebrity crush.” 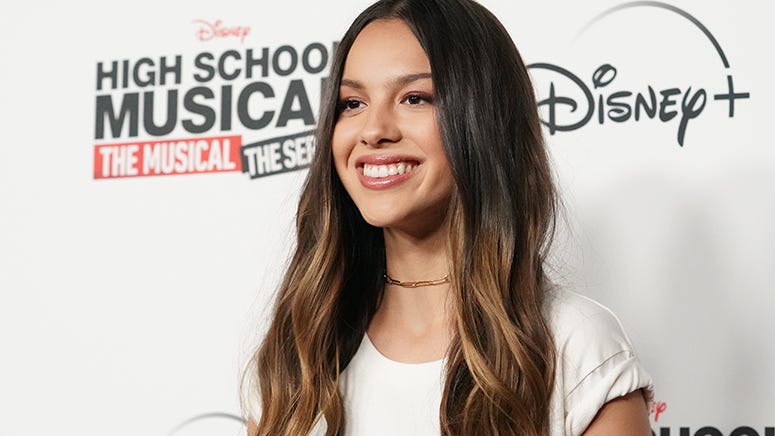 “drivers license” has seen the level of stratospheric success thus far because anyone can relate to the emotions that Olivia sings about. “‘drivers license' affects everyone, regardless of age, or gender, like you, don’t have to be a teenage girl to sort of resonate with it and that’s kind of been my favorite part of watching ‘drivers license’ go off into the world,” explains the California native.

It’s difficult to touch upon “drivers license” without acknowledging the social media stir, as well as the “response” songs that bubbled up almost instantly after Rodrigo released her track.

For Oliva she has no counter to Sabrina Carpenter’s alleged “response” music, adding, “I actually don’t know her at all, I think we met once or twice in passing, but I’ve never had a conversation with her so I don’t think I could write a song that was meaningful or emotional about somebody that I don’t know.” Rodrigo concludes, “I think artists should be able to write about whatever they want to write about.”

With the whole world taking notice of the heart-wrenching 2021 ballad, it comes as no surprise that some of Pop music’s biggest stars took a liking to Olivia’s song. Taylor Swift, promptly reached out to Olivia over social media to publicly endorse the young singer’s artistry.

Rodrigo also shares, “Lorde isn’t on social media, but Lorde’s sister reached out to me and was like ‘my sister and I love the song,’ and I was like ‘oh my god that’s crazy!’” She adds that Phoebe Bridgers has also gone out of her way to recognize the rising songstress’ talents over Instagram. In awe, Olivia notes, “It’s just so surreal to have my idols become my peers so quickly.”

Olivia reveals that Swift has gone on to become somewhat of a mentor for her. Swift wrote Rodrigo a letter based around some of Olivia’s favorite lyrics from “long story short” off of evermore. The lyrics go “past me I wanna tell you not to get lost in these petty things your nemeses will defeat themselves before you get the chance to swing.”

“So she wrote about that a little bit in her letter,” Rodrigo begins to elaborate. She continues to paraphrase what Taylor wrote to her and shares, “So, she was like ‘I think we make our own luck and I think when you’re kind to people and do what’s right it like always comes back to you in the best ways.’”

While Olivia is still soaking up the love and success that has come pouring out for “drivers license” the singer does tell us she has more projects in the works that she is focusing on. “I would be lying if I said I didn’t feel like any pressure after ‘drivers license’ but I really just don’t write songs for them to chart or to even put them out. I really just love writing songs, it’s my absolute favorite thing in the whole world to do,” explains the singer.

As the artist continues to top the charts, work hard, and create new music, she tells us that she will be delivering a new project this year alongside graduating high school. But until then she’s “just chillin’.”