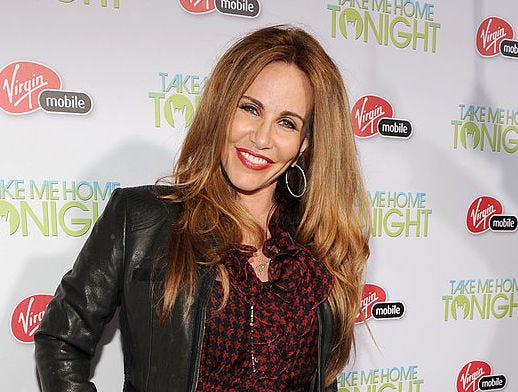 Tawny Kitaen, who starred opposite Tom Hanks in the 1984 comedy “Bachelor Party,” has died. She was 59.

According to TMZ, Kitaen passed away on Friday at her home in Newport Beach, California. The cause of death has yet to be revealed.

In the '80s, Kitaen was married to Whitesnake lead singer David Coverdale and famously appeared in several of the band's videos including "Here I Go Again" and "Is This Love."

In high school, Kitaen dated Ratt guitarist Robbin Crosby and later appeared on the cover of the band's self-titled debut album and their 1984 follow-up "Out of the Cellar."

It was that same year when she appeared as Tom Hank's bride-to-be in the comedy "Bachelor Party." Kitaen would go on to star in films such as "Witchboard," "Dead Tides," and as Jerry Seinfeld's girlfriend in a 1991 episode of his hit NBC sitcom.

After divorcing Cloverdale, Kitaen would go on to marry baseball player Chuck Finley in 1997. The pair had two daughters, endured a tumultuous relationship and eventually divorced in 2002.

In 2006, Kitaen starred on the sixth season of the VH1 reality series "The Surreal Life." Two years later, she would document her struggles with sobriety on VH1's "Celebrity Rehab with Dr. Drew."

Kitaen is survived by her two daughters, among others.