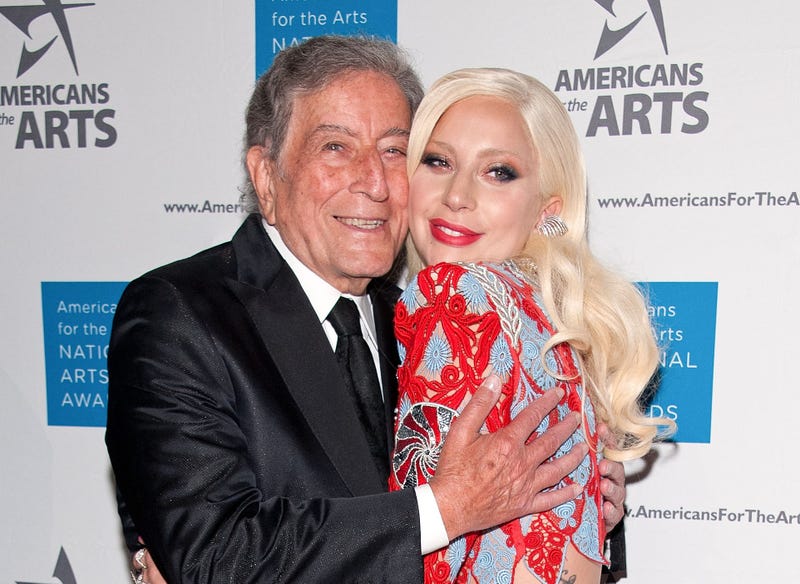 Despite revealing his recent Alzheimer’s diagnosis, Tony Bennett alongside Lady Gaga will be moving forward on the release of their second joint album.

The powerful vocal duo released Cheek to Cheek, in 2014, a sixteen-track album where the close friends breeze through the standards like “I Won’t Dance” and “Anything Goes,” from the Great American Songbook. Gaga and Bennett became fast friends after meeting in New York City over seven years ago. Gaga who considers Tony as a father figure in her life, toured and performed live with the now 94-year-old during the height of their Cheek to Cheek project.

Bennett was diagnosed with Alzheimer’s in 2016, however, ahead of the release of his second collaboration with Gaga, his wife, Susan Benedetto, opened up about the diagnosis in an article published in AARP Magazine. Bennett’s family chose to share this update about Tony because they knew the new release was arriving soon. His family had to make this decision without Tony’s input because at this stage in his diagnosis he doesn’t fully understand.

Benedetto, spoke with Gayle King during an interview for CBS This Morning. She explains that Gaga is aware of Tony’s diagnosis. Susan also explains that Bennett still recognizes those close to him, particularly Lady Gaga. "Yes, but you know, Gaga is wonderful,” says Benedetto. She adds with a laugh, "most definitely. Gaga is hard to forget."

18x-GRAMMY winner @ItsTonyBennett is battling Alzheimer's disease. His family revealed his 4-year battle in an @AARP article.
@GayleKing spoke w/ his wife, Susan Benedetto, who says music still plays a major role in his life & why the family decided to share his diagnosis now. pic.twitter.com/taSobf8mLd

During the interview, Benedetto also shares that Tony continues to sing and rehearse twice a week. The singer who started his career in the 1940s, still remembers all the words to the standards, and music is what keeps him going.

From 2018 to 2020 Bennett and Gaga reunited to record their follow-up to Cheek to Cheek amidst his battle with Alzheimer's disease. The Bennett family chose to share this news so that the public would understand why he was not participating in press surrounding the upcoming album.

In the AARP article, writer John Colapinto lays out a picture of some of the recording sessions between Gaga and Bennett and the stark moments where the icon’s struggle with the illness was deeply apparent. The sessions were filmed and Colapinto was able to watch raw footage of the two artists recording together.

Colapinto explains, “In raw documentary footage of the sessions, he speaks rarely, and when he does his words are halting; at times, he seems lost and bewildered. Gaga, clearly aware of his condition, keeps her utterances short and simple (as is recommended by experts in the disease when talking to Alzheimer's patients). 'You sound so good, Tony,' she tells him at one point. 'Thanks,' is his one-word response. She says that she thinks 'all the time' about their 2015 tour. Tony looks at her wordlessly. 'Wasn't that fun every night?' she prompts him. 'Yeah,' he says, uncertainly. The pain and sadness in Gaga's face is clear at such moments — but never more so than in an extraordinarily moving sequence in which Tony (a man she calls 'an incredible mentor, and friend, and father figure') sings a solo passage of a love song. Gaga looks on, from behind her mic, her smile breaking into a quiver, her eyes brimming, before she puts her hands over her face and sobs."

Lady Gaga and Tony Bennett have made a new album together, recorded through Tony's battle with Alzheimer's. This passage broke my heart. https://t.co/zynDHLH743 pic.twitter.com/P7eo5BUtss

Additionally in the AARP  article Tony’s son, Danny, shares how he checked with Gaga first before the family opened up about Bennett’s condition saying, "I wanted to check with Lady Gaga to make sure she was cool.” He adds, “She watches his back all the time. She was like, 'Absolutely, it's just another gift that he can give to the world.'"