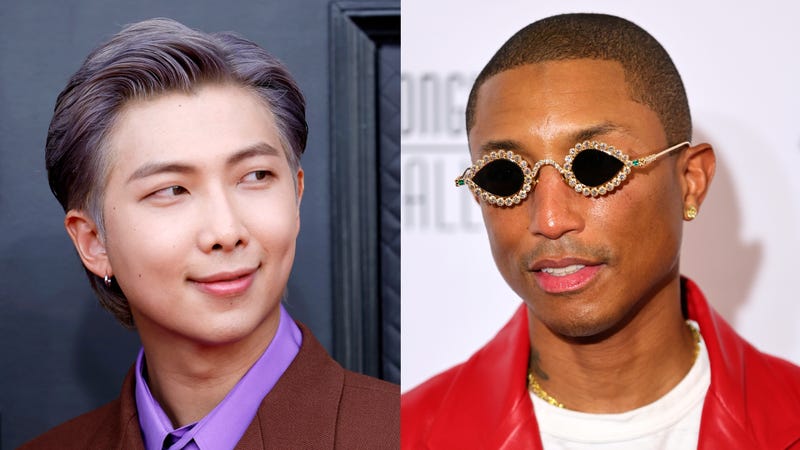 What happens when we take the writer away and ask two pop phenoms, from two completely different places and generations, to interview each other? On a brand new special Musicians on Musicians episode of Rolling Stone Music Now, Pharrell Williams and RM of BTS sit down to talk about the price of fame, the keys to creativity, why it's important to take a break every so often, and more.

To paint you a picture — RM, who went from underground rapper in South Korea to performing in sold out stadiums around the world as the leader of BTS and is now currently working on his first official solo album, sat down at the Museum of Contemporary Art in Los Angeles to meet with Pharrell, whose one-of-a-kind career as a producer, rapper, and singer has spanned decades. The conversation highlighted the way both artists use their emotions in their work —from the value of pain to the electric experience of playing for the whole world to the intimacy of producing another artist's work.

To start things off, RM is wondering how Pharrell’s creative process works, and whether it differs when making songs for himself or helping produce others. “When an artist walks in they ask for something,” Pharrell expressed, “they’ll say ‘I want something hard, or I want something dark, or I want something that’s like for the club. So I’m considering what they’re looking for, but I’m also thinking about the texture of their voice, and the patterns and the melodies that they do, and then I think of how I can give them something different than they’ve ever done before.”

Relating to certain aspects of the way RM described writing and working on projects for himself, who described it as “a complex, and comes with the pain to confess.” Pharrell noted, “the pain part for me is probably the fun part, because that’s some of the most vivid paint that we can use as artists when we’re like filling in what we want to be powerful, versus like ‘okay does it hurt enough, or does it feel good enough?’”

At another point in the conversation the duo discussed the price of fame, with RM imploring the importance of remaining true to yourself, especially with the hectic lifestyle and craziness (along with the good) that comes from having such a massive fanbase.

To hear RM and Pharrell’s entire very interesting and insightful conversation, listen to the entire episode above.