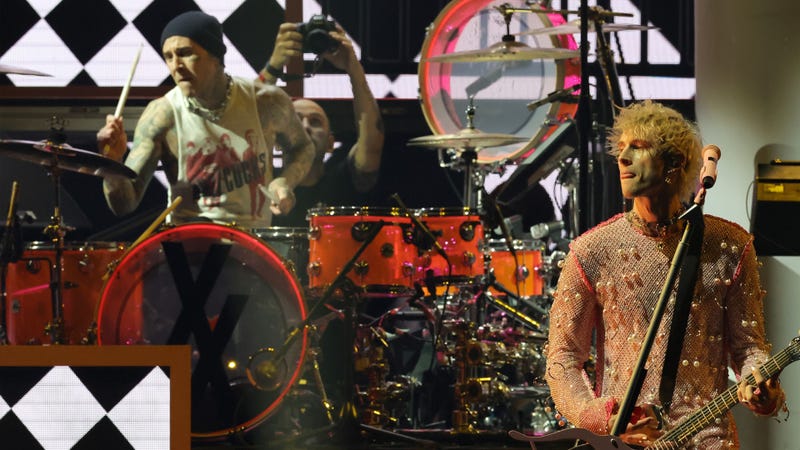 Travis Barker isn’t concerned with his doctor’s orders, and has chosen to return to his bff and frequent collaborator Machine Gun Kelly’s Mainstream Sellout Tour.

Barker, who regularly drums in his MGK’s band, was on the road with his bestie, when Kelly kicked off his tour back in June. However shortly after, the Blink-182 drummer boy was hospitalized with pancreatitis and had to postpone the fun.

Barker was hospitalized with pancreatitis on June 28, following a colonoscopy procedure. Updating his fans a few days later, he share that he’d been receiving “intensive treatment” and was “currently much better.”

After some much needed recovery time, Barker made an appearance at Kelly’s recent LA concert and has since decided to rejoin the tour for final leg of the US tour, despite his doctors concerns.

Earlier this week, MGK shared the news on his Instagram Story writing, “Against his doctor’s orders AND with a broken thumb, I convinced @travisbarker to come join us for the last couple days of the North American tour,” alongside a screenshot of the pair on FaceTime.

Then a couple days later, Barker confirmed his return with some pretty interesting tweets. “I’m impregnating the entire crowd at the @machinegunkelly show tonight.” Followed by another that said, “with a broken thumb and torn tendons.”

With a broken thumb and torn tendons

Check out some fan caught footage of Barker’s return to the stage from MGK concert at the Enterprise Center in St. Louis, Missouri. The duo played a cover of Blink-182’s 1999 hit “All The Small Things,” watch below.

MGK has just two gigs remaining US tour date, on August 11 in Indianapolis, and Cleveland on Saturday, August 13. Next month he’ll be hopping across the pond for the European leg, before returning to the UK/Ireland in October.