The Dallas Cowboys have a pair of running backs with big-play potential.

Jerry Jones wants to see more of them both.

While Ezekiel Elliott has been the lead back, Tony Pollard has emerged as a threat since the Cowboys began involving him more in the offense. And through the first two games, Elliott only has six more touches than Pollard.

Sunday's win over the Cincinnati Bengals was another example of how the two can play off one another. Elliott got more carries (15 for 53 yards to Pollard’s nine for 43 yards and a touchdown), while Pollard had four receptions for 55 yards.

During his regular appearance on “Shan & RJ”, Jones said he wants to see more usage of both players.

“I would say that I’d like to see Zeke (get more carries) because it’s what he does to the defense, what he physically does. I’m going to make sure that we give Zeke the load that the team deserves to have of him,” Jones said when asked if he was expecting a relatively even split in carries between the two. "Now, you say, well, doesn’t that take away from the obvious out there, Pollard, who made those big plays and can make those big plays.

You can see the zip that (Pollard) adds to the offense, and we’ve just got to do both, we’ve got to take advantage of the fact that we’ve got both these guys ready that can really give that defense heck. I’d like to see a continued use – to answer your question, I’d like to see both used about 20 percent more.”

Especially with Cooper Rush at quarterback right now, keeping Elliott and Pollard heavily involved is imperative. Certainly, Dallas could use more out of Elliott on the ground, but they have plenty of options with their backs.

We’ll see if the tandem gets involved to Jones’ liking when the Cowboys play the Giants on the road on Monday Night Football. 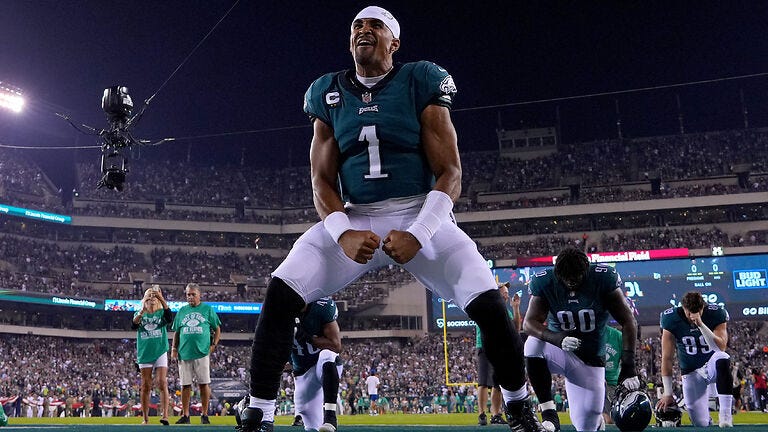