All it took was a little bit of creativity from Adam Sandler and Christopher McDonald, followed by a little bit of love from fans on social media, to thrust our favorite fictional golfer back into the spotlight.

On the 25th anniversary of hilarious sports comedy "Happy Gilmore," Sandler showed us he still had his trademark running swing in his bag of tricks and received almost a million likes on Twitter because of it. You think the fans are hungry for more Happy? 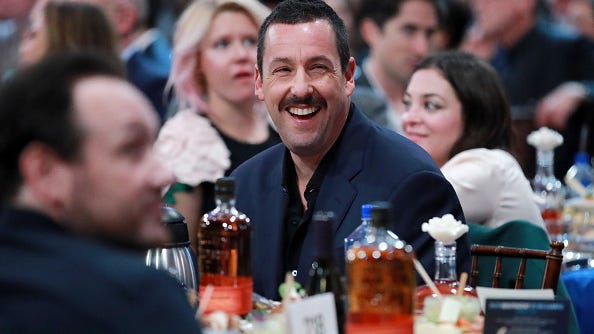 It appears to be that way, as has been the case for some time. Dan Patrick asked Sandler if there have been any official talks of a sequel of the 1996 classic on his show.

"It has not been discussed, but it certainly has been discussed on the internet," Sandler said. "And believe me, that senior tour idea, it would be so amazing..."

Patrick asked if Sandler would be cool with green-lighting the concept — which he doesn't actually have the power to do — to which he responded... of course he would!

"I am double in," McDonald said, who would reprise his role as the oh-so-hatable Shooter McGavin. "I would love to do it. Everybody's been screaming for it like Adam said, on in the internet, and I just gotta say it would be a complete blast. A senior tour with us two? Oh my god."

Consider me triple in. And also consider the endless possibilities of other Adam Sandler sequels. Could Billy Madison take on the schooling system again as an older adult going through a mid-life crisis? Could we check back in on how Henry Roth and Lucy Whitmore's relationship is going after what we would have to estimate has been around 6,000 first dates? Any chance Sonny Koufax and Julian McGrath are still as close as they were in "Big Daddy" — and does Scuba Steve still make any appearances? And for the fans of deeper cuts, is there any chance Whitey and Eleanore Duvall are still with us to celebrate the holidays?

While I loved the route that Sandler took with the non-comedy "Uncut Gems" and would like to see him further pursue the more serious side of the film industry, a throwback to some of his other classics, starting with "Happy Gilmore," would certainly be entertaining.