Entering Sunday's contest between the Detroit Tigers and the Los Angeles Angels, slugger Shohei Ohtani was riding quite the power surge. He homered on Tuesday against the A's, his only hit of the game. He homered again on Wednesday in a two-hit effort. On Friday he hit two home runs, these coming against Detroit, giving him blasts number 20 and number 21 on the season to move him closer to the top of the AL leaderboard. Saturday saw yet another ball leave the park, and we saw the same in the bottom of the fifth on Sunday.

Do you guys ever think about how we all get to watch Shohei Ohtani play baseball? 🥲 pic.twitter.com/CTQjw5QRDY

23 home runs is good for the league lead, tied with Vladimir Guerrero Jr., and the fact that he had five home runs in the past five games with a whopping 1.595 OPS prior to that fifth inning dinger made him perhaps the scariest opponent possible for a Tigers pitcher. Unfortunately for Tigers reliever Gregory Soto, it was Ohtani who happened to be the batter who strode to the plate in the bottom of the seventh in a tie ball game. Soto had successfully retired the first two batters of the inning, but that couldn't have brought him much solace with the almighty Ohtani at the dish.

So, naturally, Ohtani dug into the batter's box and... squared up to bunt?

Shohei Ohtani squares around to bunt after hitting 6 homers in 6 days and the pitcher is so confused that he suddenly balks mid-delivery pic.twitter.com/Vk2eBBjNhr

Yeah — I would have that reaction, too, Soto, so don't feel too bad. But it doesn't make it any less ridiculous that a pitcher literally couldn't believe his eyes and had to stop himself mid-pitch to wonder what on earth was going on. Ohtani deciding to bunt after six home runs in six games, including one in his last at-bat? That's utterly insane... so insane that it turned out to be exactly what occurred.

Luckily, no one was on base, so the balk didn't do much, and Soto ended up retiring Ohtani on strikes to end the inning. Three frames later, the Tigers scored two and effectively ended the game to salvage what would have been a four-game sweep. But in the process, we saw one of the whackiest deliveries of the season, and that's just one more reason that Ohtani is must-see TV every time he touches the field. 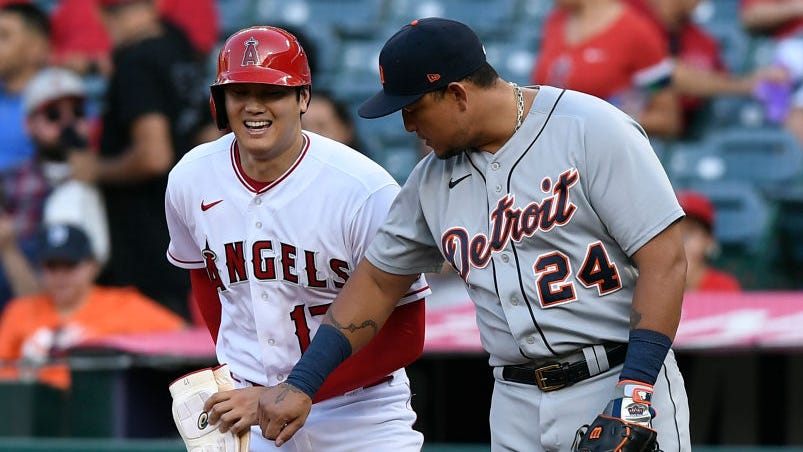