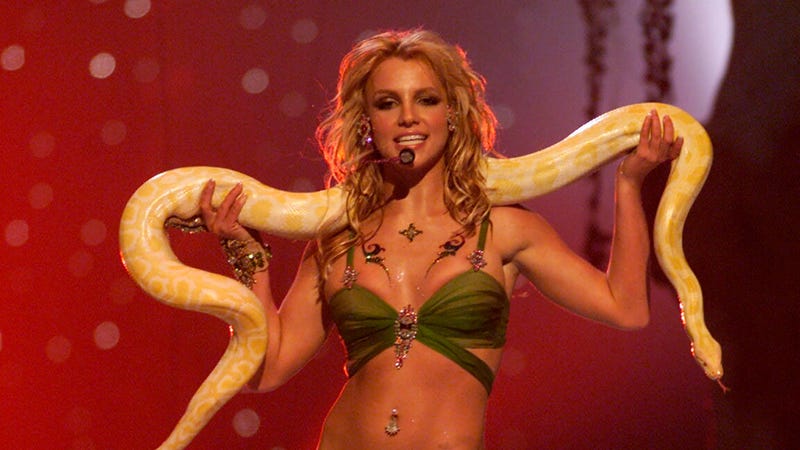 Insert your own "she did it again" jokes, folks. We're not here for that. Britney Spears recently posted a throwback series of photos on her Instagram with a nod to her on-stage performance while carrying a live snake 20 years ago -- not by showing off a new pet but capturing herself in a skin-tight snake suit.

Although we're not exactly sure who Britney seems to be yelling hilarious profanities at in the post's caption, we'll take her any way we can get her!

Brit Brit captioned her bewildering, reptilian post saying, "I held a snake at the @VMAs one time but decided to go ahead 20 years later and become the motherf***ing snake myself 🐍🐍🐍 !!!! And since TRICKS ARE FOR KIDS you tricky little s***s … who knows what color snake I will be tomorrow 😳🤔😏 !!!!??? STAY SAFE folks and watch out for the 🐍🐍🐍🤭🤭🤭 !!!!!" Then, she did it again. (Darn, made the joke anyway.) While we're unsure who the "tricky little s***s" are, Britney of course was referencing her 2001 MTV Video Music Awards performance of her hit "I'm A Slave 4 U," where she famously shook a leg with a live albino Burmese python named Banana. Ah, memoriesssss.

The new post follows suit with a number of images the singer has posted of herself on a plain backdrop; some showing her in a bright neon yellow one-piece and black fur coat, others where she dons pink hair and a cat-suit. Meow!

These posts showing Britney having fun at home are overshadowed by the lengthy conservatorship battle she has been engaged with for years. Fans and commenters have expressed their love and concern on each of her posts as she awaits a scheduled hearing on June 23, where she will apparently have the opportunity to finally speak her mind. A separate hearing has also been scheduled for July 14 to discuss various updates on motions and accounting.