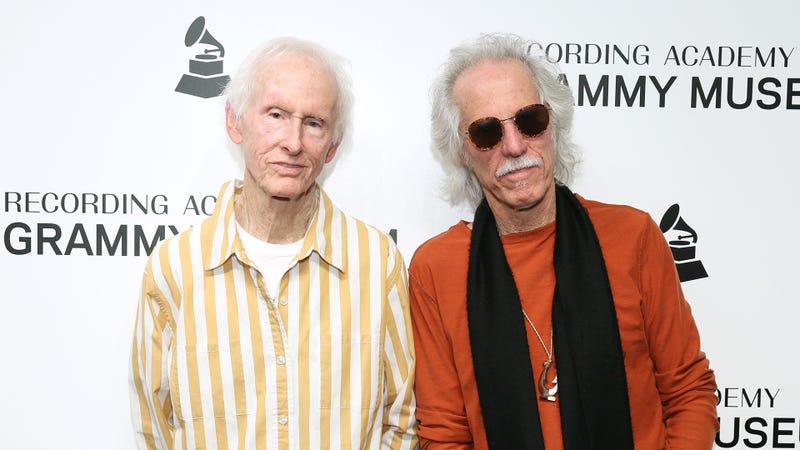 American psych-rockers The Doors, fronted by Lizard King Jim Morrison, got their start in the mid-sixties releasing a total of six albums in just five years, until the ride was halted by the untimely death of Morrison at the age of 27 in July of 1971.

Following up last week’s episode with Johnny Echols from the band Love, this week famed record producer Rick Rubin speaks with the last two surviving members of The Doors -- guitarist Robby Krieger and drummer John Densmore -- about their come up up in the Los Angeles rock scene alongside a band whom they idolized and later eclipsed. In their brief time together, The Doors quickly became one of the biggest acts of the late 60s, with an anti-flower-power appeal accentuated by Morrison’s heavy, brooding lyrics, and keyboardist Ray Manzarek’s frenzied organ licks. In this chat, Krieger and Densmore discuss their tumultuous histories with Morrison -- whom Densmore refers to as a "Kamikaze drunk" -- while they each recall LSD-fueled stories from their early gigs with their fellow riders on the storm, as well as the role Acapulco Gold played in Morrison’s songwriting process.

Remembering how The Beatles were not in such a great place friendship-wise when creating their White Album, Rubin wonders about bands in the midst of friction putting out arguably their greatest work. "Thats why we are so big, lemme tell ya! Oh my God," Densmore jokes. "It was three against one the whole time. It was, 'what is he gonna do tonight,' just craziness," admitting that he believes Morrison was not only being purposely provocative, but also just being himself. Krieger agrees, "That was part of it. He liked to get people's goats... he knew after a while it wouldn't work with us but that didn't stop him from trying."

"I remember when I met his sister," Densmore adds, "she said, 'you know my brother growing up was always pressing our buttons. Did he do that to you guys?' Duh! Testing, let's see what the boundaries are, or whatever." One example they offer was the fact that he didn't have a phone or car, and eventually got an apartment that had extra space so they wouldn't have to search for him on Venice rooftops. "You never knew where he was," says Krieger. "Finally we got this place and there was a place for him right next door, but he wasn't around there much."

Listen to the full Broken Record episode featuring The Doors' Robby Krieger and John Densmore now playing on Audacy -- and follow along for more conversations with Rick Rubin, Malcolm Gladwell, Bruce Headlam, and Justin Richmond as they speak with the musicians you love to discuss their lives, inspiration, and craft.

While you're in the mood, browse and favorite some of Audacy's all-new stations like The Doors Radio, The 50s, The 60s, The 70s, Counter To The Culture, 80s Guitar, Rock N’ Road, Freedom Rock, The Canyon, Arena Rock, Wake Up and Rock, and The Roots of Rock for those who crave the early days.