Bryant, his 13-year-old daughter, Gianna, and seven others died that day after a helicopter carrying them to a youth basketball practice crashed about 30 miles north of Los Angeles.

Bryant’s death sent shockwaves across the globe to fans and non-fans alike and left the sports world and basketball community shaken that the 42-year-old Hall of Famer was no longer with us.

LISTEN LIVE ON RADIO.COM: Tune in on Tuesday, Jan. 26 at 12:30pm ET / 9:30am CT for a tribute and moment of silence on the 1-year anniversary of the deaths of Kobe Bryant, daughter Gianna, and 7 others who died in the helicopter crash. 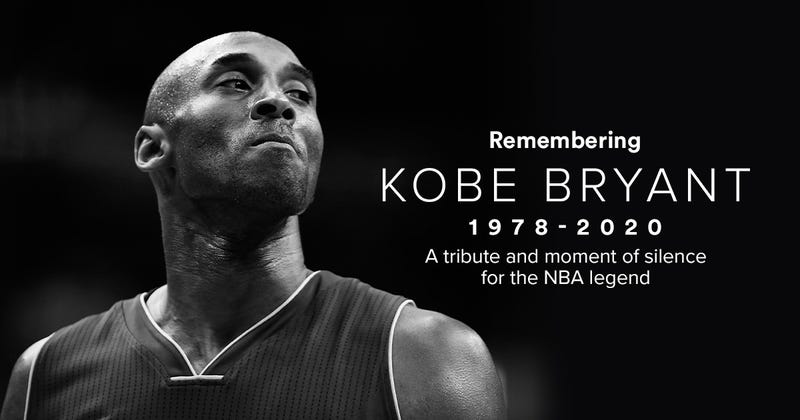 Players began paying homage to Bryant on Monday as Kyrie Irving arrived for the Nets game wearing a No. 8 Lakers jersey and Montrezel Harrell showed up for the Lakers game in Cleveland with a Kobe Bryant-themed mask.

The Cleveland Cavaliers, who were playing the Lakers on Monday night, had a touching video tribute to Bryant.

Other athletes, media members and celebrities took to their social media pages to remember him.

Rest In Peace my guy...🙏🏽
Today we honor and remember you and Gigi!! pic.twitter.com/2GVoq1VQTy

I'll always wish I had one more conversation with Kobe. For all his greatness and everything he accomplished, his best days were still to come. My thoughts are with the family and friends of Kobe, Gianna, and all the others who were taken from us far too soon a year ago today. pic.twitter.com/SrZunsSqo1

I miss you, hermano... pic.twitter.com/Wd2MdT1JZ0

One year ago today.... pic.twitter.com/nELJSuLJOl

Many of us remember hearing the news of the tragic death of #KobeBryant and his sweet daughter #Gianna. It was one year ago today and next on @GMA how many are paying tribute to Kobe's life & legacy.

My guy #rip Kobe Bryant you are missed ! pic.twitter.com/T3QX1sGCWN

Remembering Kobe & Gianna Bryant and all those who tragically lost their lives one year ago today. pic.twitter.com/jH8PyVUvPH

The last year showed us life can be unpredictable & fragile.

It’s been 1 year since the deaths of Kobe Bryant, Gianna & those on board with them.

Kobe was a champion of basketball, but also of women’s sports. He was the ultimate #GirlDad.

Thinking of his loved ones today. <a href="https://t.co/e5Vq7ZDqE1" rel="nofollow" class="outbound-link