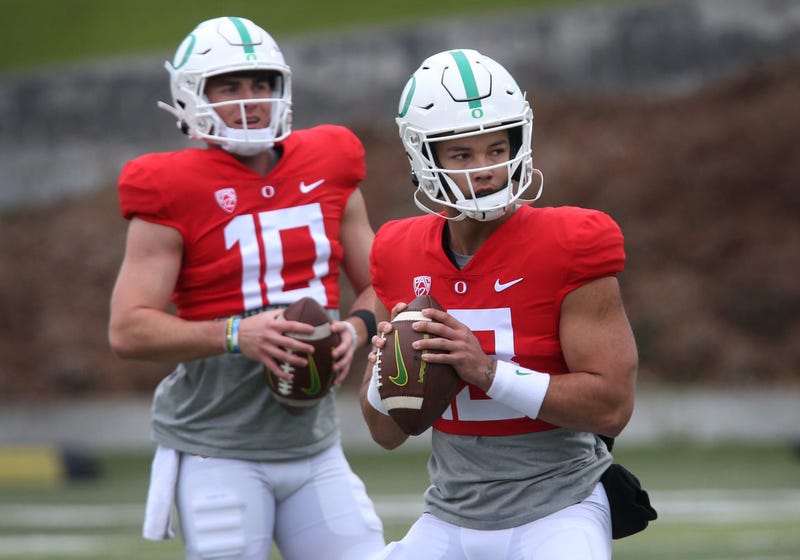 Oregon Ducks spring football is in full swing this week and fans have been looking for any encouraging signs from first year head coach, Dan Lanning. Even though he has a defensive background, the topic of conversation has been whether Lanning will select Ty Thompson or Bo Nix as the starting quarterback heading into fall camp. Of course, Jay Butterfield is also in the mix, but the clear attention is drawn on Thompson & Nix.

Apparently the current rotation has the redshirt Freshman Thompson under center with the ones.

Matt Prehm from 24/7 Sports joined AJ & Dusty to discuss the 15 play exhibition media members were able to view recently. “Ty Thompson went first. Bo Nix went second. And then Jay Butterfield went third,” Prehm described the order of events. “This has probably already happened at some point in the previous three practices where Ty got some reps with the ones.”

Prehm said that all three series did not go extremely well, with interceptions and stalls to be passed around. Speaking from experience, I can tell you huge decisions about personnel are usually not made during spring ball. That’s not to throw away the entire practice of playing football during the spring. Most of what’s happening is done to remind players what it’s like to run in pads.

Fans will most likely expect Bo Nix to be given the opportunity to win the job. But as Prehm said during the interview, Lanning and his staff also want to make sure they know what they have in Thompson.