CHICAGO (670 The Score) -- The Bears on Monday lost for the eighth time in their last nine games, falling 17-9 to the Vikings at Soldier Field. Here are the observations from a night of frustration along the lakefront.

Support system
Bears rookie offensive tackle Teven Jenkins has been flagged seven times in the past two games. While that's far too much, he should be excused for one penalty in particular Monday.

With 5:51 remaining in the third quarter, Bears rookie quarterback Justin Fields was shoved hard out of bounds by Vikings defensive end D.J. Wonnum. The hit wasn’t penalized by the officiating crew, but Jenkins took exception, rushing over to several Minnesota defenders and getting into an altercation.

Jenkins first approached Wonnum and then was alone with six Vikings before a skirmish broke out. He was penalized for unnecessary roughness.

“I definitely love the mindset, and I love him sticking up for me,” Fields said. “I think that's what we need more of.”

The Bears didn’t have enough of it. Good for Jenkins defending his quarterback -- he was doing exactly what a teammate should do on behalf of Fields. 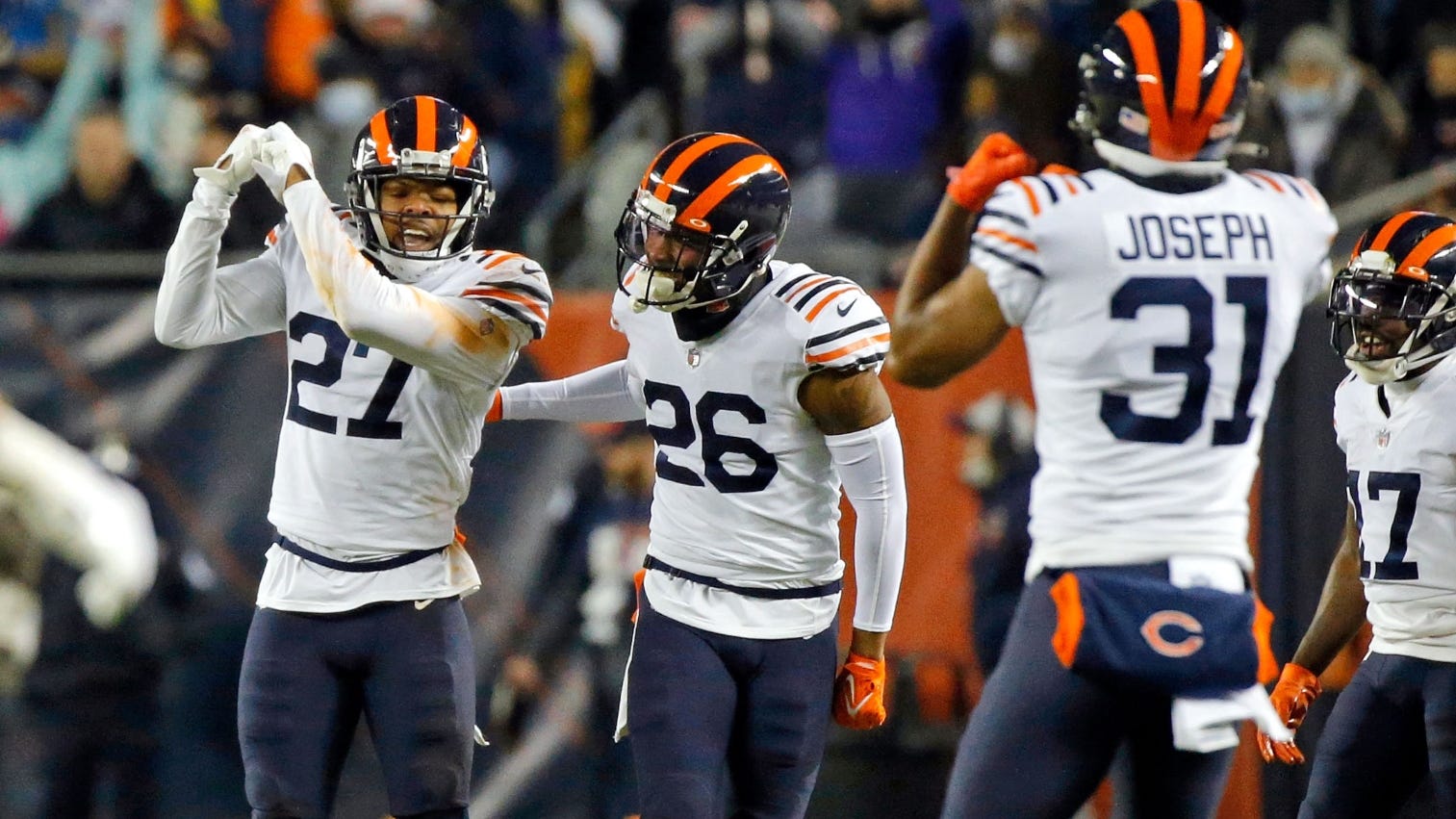 On the other hand, it was disappointing to see Bears veteran right tackle Germain Ifedi confront Jenkins on the field at the end of the skirmish. The six-year veteran Ifedi gave a shove to the back of the rookie Jenkins. While Ifedi was surely thinking about the game situation – the Bears were at trailing 17-3 and struggling to move the football – the most important part of the final games is supporting Fields.

The Bears have a coaching staff that understands changes are coming after the season, a group of veteran players who realize their days in Chicago are numbered and several young players experiencing NFL action for the first time.

There are many moving parts and individual priorities surrounding the 22-year-old Fields, whom the Bears are hoping to develop into their franchise quarterback. Every snap matters as Fields looks to improve, but his development is being jeopardized by the Bears' dysfunction around him.

If the Bears are struggling to guide the growth of Fields, they can at least do their part in defending him. Jenkins was right to do that.

4th-down bad
The play the Bears ran on fourth-and-1 at the Vikings’ 21-yard line with 1:02 in the third quarter represented a lot of the struggles under Nagy’s watch the last four years.

The Bears got too cute after running back David Montgomery had to leave the game for a helmet repair, lining up receiver Darnell Mooney in the backfield with the hope of creating a mismatch against a Vikings linebacker. Fields also broke the huddle for a quick snap, aiming to catch a defender jumping offsides or out of position, but he did so before clearly calling the entirety of the play for all to hear.

The last part of the play call from Fields referenced where Mooney was supposed to line up. But Mooney didn’t know, instead scrambling to a spot in the backfield before the play clock expired. Fields snapped the football for a naked bootleg to the short side of the field on the right, where the Vikings had Mooney covered well initially as cornerback Cam Dantzler stayed in the flats for coverage.

Mooney was the first read for Fields, who then missed an opening for him while looking downfield for his second read. By the time Fields brought his eyes back to Mooney, it was too late. He was sacked by Wonnum and the Bears turned it over on downs.

“I know that next time,” Fields said. "If I see Cover-2, I'll rip and just, boom, go low-high-low, right down, get the corner to move back and hit Mooney in the flat. It's just an instance where you learn.”

Turning a corner
Have the Bears found a diamond in the rough in rookie cornerback Thomas Graham Jr.? It’s too soon to say after the sixth-round pick made his first NFL start, but there’s certainly promise.

Graham was a standout over three seasons at Oregon who opted out of playing during the 2020 season. He had eight interceptions and 40 pass break-ups in 40 games with the Ducks, showcasing strong ball skills in the Pac-12. Graham showed more of the same during his debut Monday, recording three pass break-up against the Vikings.

Graham has earned the right to start the final three games of the season at cornerback opposite of Jaylon Johnson.

Hicks brought an edge to a defense that featured a makeshift secondary, and the Bears fed off his presence, holding the Vikings to 193 yards of offense and 3.2 yards per play.

These may be the final three games for Hicks in a Bears uniform. You know the team will continue to feed off his energy.

Extra points
-- Fields has a fumbling problem. He now has fumbled 12 times in 12 games, including twice Monday, and it’s something that must be cleaned up. There was a lot to like from Fields as he posted the best quarterback rating of his NFL career (96.6), but ball security remains a concern.

-- Nagy was right to be livid with the unnecessary roughness penalty called on safety Deon Bush, who was trying to make a play on a key third down. Nagy was so animated with the officiating crew that the Soldier Field crowd got behind its embattled coach – before later chanting again for his firing.

-- What more can you say about Bears edge rusher Robert Quinn at this point? He’s up to 16 sacks and needs 1.5 more to tie Hall of Fame pass rusher Richard Dent for the most ever by a Bears player in a single season. Quinn has had a remarkable season and could potentially set a special achievement in the final three games.

-- The Bears were 2-of-12 on third-down conversions. That should speak for itself.

-- The Bears found the end zone once in eight trips into Vikings territory.

-- How are there still three games left in this season?