Was Glennon a poor man’s Dalton or Dalton a rich man’s Glennon? Those were the football gods you heard cackling loudly in a half-empty stadium on the lakefront.

After a 29-3 victory over the lowly Giants, Bears coach Matt Nagy again sounded like a guy who has accepted his inevitable fate.

“For me, I take it day by day," Nagy answered when asked about possibly coaching his last home game on the Bears sidelines. “If it goes that way, it’s meant to be." 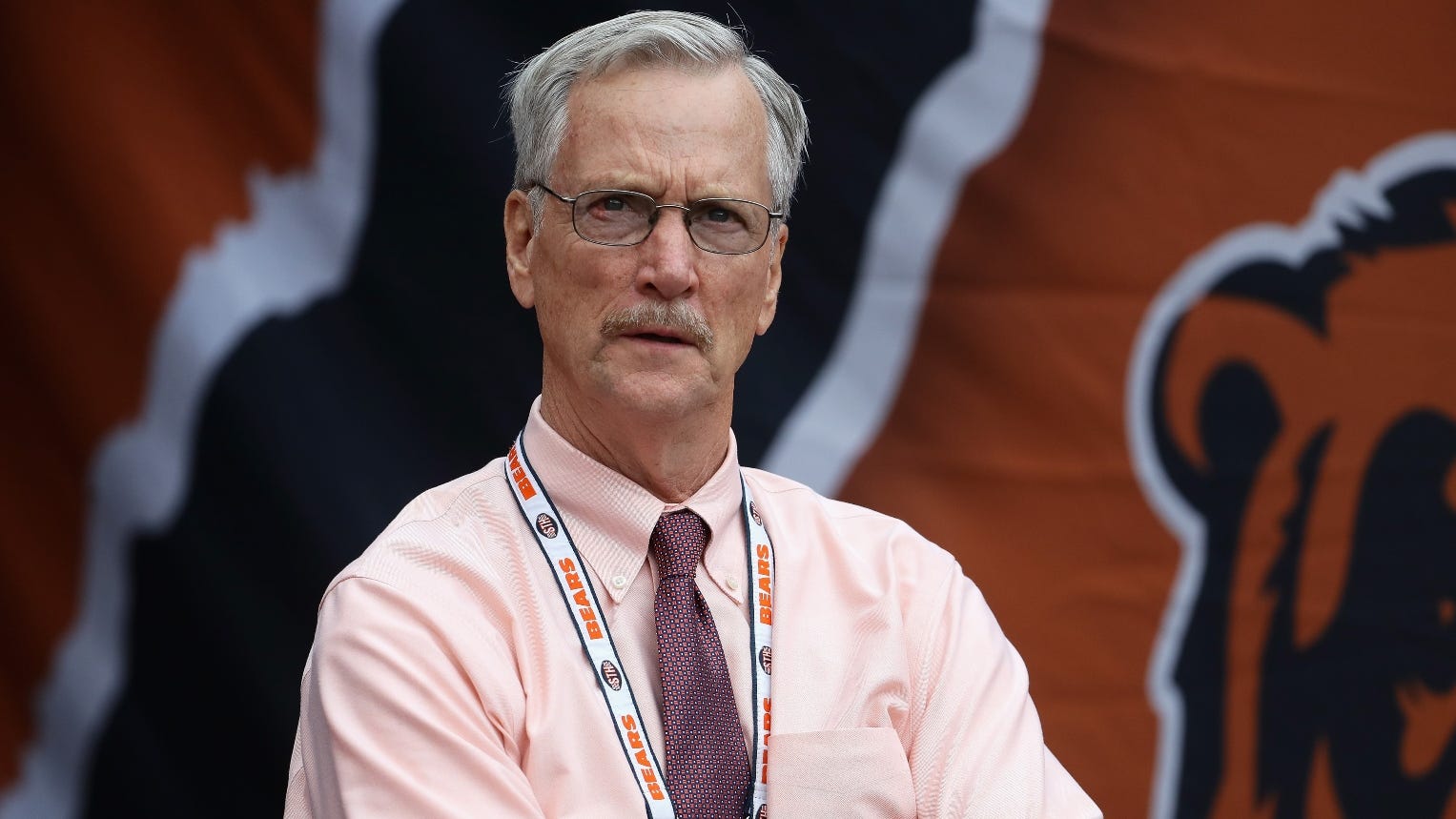 Bernstein: For Bears, the real game isn't on the field

Yet for reasons hard to fathom, local and national speculation about Pace still suggests the McCaskeys might be on the fence concerning his employment status.

How is that possible?

Because it’s the Bears, who don’t know what they don’t know when it comes to making smart football decisions?

Firing Nagy but still pondering Pace wouldn’t represent a bold move. It would be a good start.

Pace took over as general manager seven years ago this month, and the Bears have zero playoff victories during that span. Zilch. That alone should offer enough overwhelming, bottom-line evidence for change but, if not, there was the gangly Glennon operating awkwardly in a white No. 2 Giants jersey to serve as a reminder of Pace’s worst free-agent signing.

That came on March 10, 2017, a month before Pace moved up to draft Mitchell Trubisky with Patrick Mahomes still on the board, when the Bears outbid themselves to guarantee Glennon $18.5 million in a contract reported as a three-year, $45-million deal. Glennon had thrown 11 passes in 2016 to convince Pace.

“Mike Glennon is our starting quarterback, and we’re fired up about that," Pace said back then.

That’s one hell of a legacy.

By Week 5, Glennon had taken his last snap as a Bear after starting 1-3 and throwing four touchdowns and five interceptions – or $4.6 million per scoring toss. You can wonder what Glennon is still doing in the pros after he posted a prep football-like stat line of 4-of-11 for 24 yards and two interceptions Sunday, but the more pertinent question remains how Pace still has his job.

Beyond Glennon, the bad decisions -- Kevin White, Leonard Floyd, Kyle Fuller, et al. -- outweigh the good ones. Under Pace, the Bears never really fixed the offensive line and have lacked an identity. But his poor judgment at the quarterback position only punctuates the problem: Glennon, Trubisky, Nick Foles, Dalton. As they say in NFL press boxes and front offices, it’s all about the quarterback.

Boldly trading up to draft Justin Fields, who’s anything but a sure thing after 10 starts, isn’t enough deodorant to remove the quarterback stink all over Pace.

Those who meet Pace like him because he’s as relatable as they come, a polite and considerate man, but the Bears simply need a new set of eyes and a fresh approach. The NFL is about results, and the Bears haven’t produced enough significant ones since 2015 in a passionate football city. Nagy’s shortcomings have been well-documented, but Pace’s apparently need reinforced if reports of the McCaskeys’ uncertainty are accurate.

Logic has left the building, with more examples coming Sunday despite the team’s first home victory in 91 days. An organization with a clear vision of player development understands the value of experience. Yet with nothing to play for but pride against the Giants, 39-year-old veteran Jason Peters started at left tackle for the Bears in place of rookie Teven Jenkins and journeyman veteran Artie Burns started at cornerback instead of rookie Thomas Graham.

Why? Those decisions came a week after the Bears started Germain Ifedi, on a one-year contract, at right tackle over rookie Larry Borom because the Seahawks were Ifedi’s former team.

It all underscored how little faith anybody should have in the Bears’ ability to develop Fields unless they make drastic changes.

If the Bears envisioned Fields taking over as early in the season as he did, they neglected to prepare him during training camp when he seldom practiced with the No. 1 offense. If the Bears planned on letting Fields sit, watch and learn, then they did a lousy job of having the discipline to do so once Dalton returned from injury.

Either way, Fields’ inconsistency as a rookie reflects the way the Bears have dealt with his development. He’s kinda good, kinda bad and kinda more unpredictable at this point than Chicago expected. That doesn’t mean Fields still can’t be great. It only means he has yet to remove doubt.

With Fields unavailable again against the Giants due to injury, the Bears started Dalton over Foles for reasons only Pace and Nagy truly understand. Foles led the Bears to a fourth-quarter comeback victory over the Seahawks last week, posting the team’s highest passer rating of the season by a quarterback who played all four quarters. Foles’ reward? Stand on the sidelines in frigid temperatures and watch Dalton work. Nagy offered an explanation surely Pace supported, but none of it made any sense.

Serviceable as ever, Dalton completed 18 of 35 passes for 173 yards, a touchdown and an interception with a 63.1 passer rating. Foles looked cold.

The Giants looked awful enough to discount any progress the Bears (6-10) might want to point to as signs of late-season life. The visitors deserve strong consideration as the worst team in the NFC. It’s almost as if the league scheduled the Giants to play in Chicago to make the Bears feel better about their New Year’s resolutions. In New York, they're wondering if the Mara family might want to rethink their vote of confidence for coach Joe Judge – a referendum on Judge, if you will.

As for the game itself, it met the low expectations. Two teams going nowhere struggled to hold our attention for three hours, though give the Bears credit for an early jolt of interest.

Just 18 seconds after kickoff, they led 7-0 thanks to a strip-sack forced fumble by promising pass rusher Trevis Gipson that gave the Bears the ball at the 2-yard line, and David Montgomery followed with a touchdown run on his team's first offensive snap. Montgomery found room behind 338-pound defensive tackle Khyiris Tonga, who amusingly lined up at fullback in the I-formation that Nagy wasn’t hired to run.

A second straight takeaway on the next series came courtesy of safety Tashaun Gipson Jr., who intercepted a Glennon pass deflected by Burns and returned it 31 yards to the Giants’ 24. Just seven plays later, Dalton found Darnell Mooney in the back of the end zone to make it 14-0 with 8 minutes, 8 seconds left in the first quarter.

Even that scoring play invited scrutiny because it came on fourth-and-1 from the 2-yard line so, naturally, the Bears came out in the shotgun in case anybody started getting encouraged about any 11th-hour commitment to power football from Nagy.

The Bears defense finished strong by creating four turnovers, recording a safety and limiting the Giants to 151 total yards. Robert Quinn made history, breaking Richard Dent’s franchise single-season sack record with his 18th in the fourth quarter – and avoiding an asterisk by doing it in 16 games. David Montgomery ran as angry and hard as ever, like a playoff spot was on the line, with 64 yards on 22 carries. Mooney caught seven more passes to give him more in his first two NFL seasons than any other Bears receiver ever.

And just in case anybody got too carried away, some late play-calling silliness reminded everyone of the change looming after next Sunday’s finale.

On fourth-and-4 from Giants’ 9 with 1:42 remaining, Montgomery took the direct snap out of the wildcat formation – a Nagy short-yardage favorite. Montgomery faked a run and attempted to hit tight end Cole Kmet with a jump pass. Giants linebacker Tae Crowder plucked it out of the air, thwarting the attempt and ending the silliness.

“Some of them are in the incubator for a long time," Nagy said of the trick play. “That one was not in there very long."

Nagy’s incubator is close to being out of service in Chicago.

The end of his tenure is near.

This was a happy way to bring in the new year for Nagy, but his days as the Bears head coach appear numbered.

More importantly but less discussed, so should his boss’s.