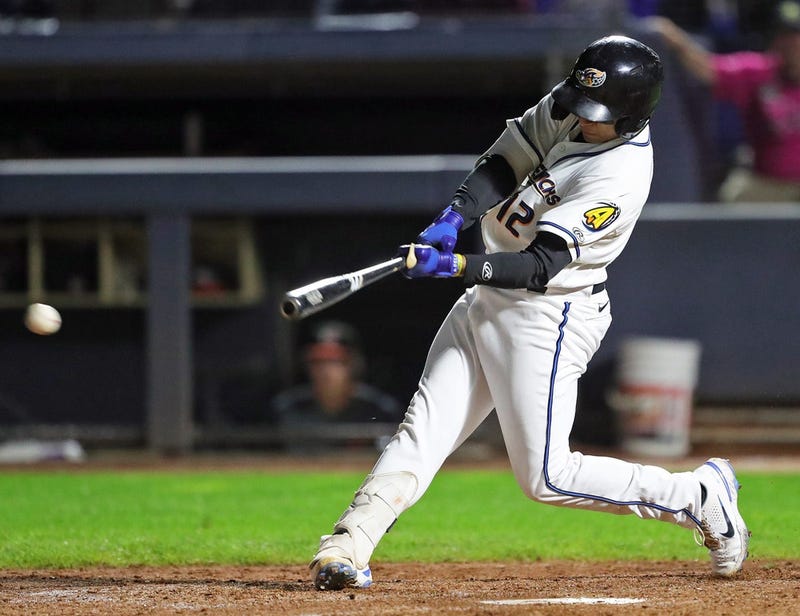 Akron RubberDucks catcher Bo Naylor (12) connects with a pitch for a base hit during the ninth inning of Game 3 of the Class AA Northeast Championship series against the Bowie Baysox at Canal Park, Friday, Sept. 24, 2021, in Akron, Ohio. Photo credit © Jeff Lange via Imagn Content Services, LLC
By Mitch Spinell

In a season full of minor league call-ups that have shaped the Cleveland Guardians' roster, catcher Bo Naylor is the club's latest.

The 22-year-old prospect was promoted to Cleveland's taxi squad ahead of the Guardians' Thursday night matchup with the Tampa Bay Rays. While he will not be officially active, Naylor will be allowed to train with the team and occupy the bench and bullpen following the end of Triple-A Columbus's season, which came on Wednesday.

"The alternative was, he could go home, he could continue to work out in Columbus, or we could have him up here in a major league environment," Guardians president Chris Antonetti addressed the media prior to Thursday's game. "We thought it made sense to have him up here to be around our staff, our coaches...at a minimum, he could be a foul tip from being an option for us if needed. The more familiarity he has with our environment, the better."

Of course, Naylor was asked about joining his older brother, Josh, at the major league level.

"He was excited," the younger Naylor joked Thursday afternoon. "I feel like with Josh, everything that I tell him, he's over the moon for it. He's a really supportive brother...It's really good to be able to be with him here and be able to share this experience with him."

Naylor will join a catching core that already includes Austin Hedges and Luke Maile on the active roster.

"Those guys are elite athletes in the game. They've got special minds," says Naylor. "Being able to see that first-hand is something that only a few people can be able to wish for. I'm lucky to have that experience, and it's something I look forward to."