CLEVELAND, Ohio (92.3 The Fan) – The Guardians continue to do all they can to make sure Larry Doby’s legacy isn’t forgotten.

75 years ago, Doby broke the color barrier in the American League on July 5, 1947 with the Cleveland Indians at Comisky Park in Chicago against the White Sox.

Guardians manager Terry Francona hopes Doby, and what he meant to baseball, won’t ever be forgotten.

“I hope [not], because I know people here with our ballclub have tried really diligently to not allow that to happen,” Francona said. “I get it, the league, there’s reasons, OK, whatever. That’s not up to me. But here’s a guy that was roughly six weeks or two months, he broke in after Jackie Robinson.
I’m going to go out on a limb and say they weren’t throwing too many parades for Larry.”

Doby hit the first home run in World Series history by an African American player during Game 4 of the 1948 World Series. In 1949, Doby was selected as an American League All-Star. In 1951 he collected a hit in 21 consecutive games.

“You look at some of the history,” Francona said. “Here’s a guy that served in the Navy, served his country, then comes home and is told he can’t play. That is like, just brutal. It just makes my stomach turn. So I’m glad we’re celebrating his ability to be that tough, and to absorb everything I’m sure he had to and stuff we don’t know he had to.

“But I just want to make sure that we’re not celebrating the fact that we’re treating people equal. That should be a given.”

Francona also recalled spending time with Doby at a fantasy camp in Winter Haven back in the 90’s.

“Larry was one of the guest coaches,” Francona said. “So we were all crammed in that little locker room there, which for me was a treat. I don’t know if Larry thought it was a treat, but I did.” 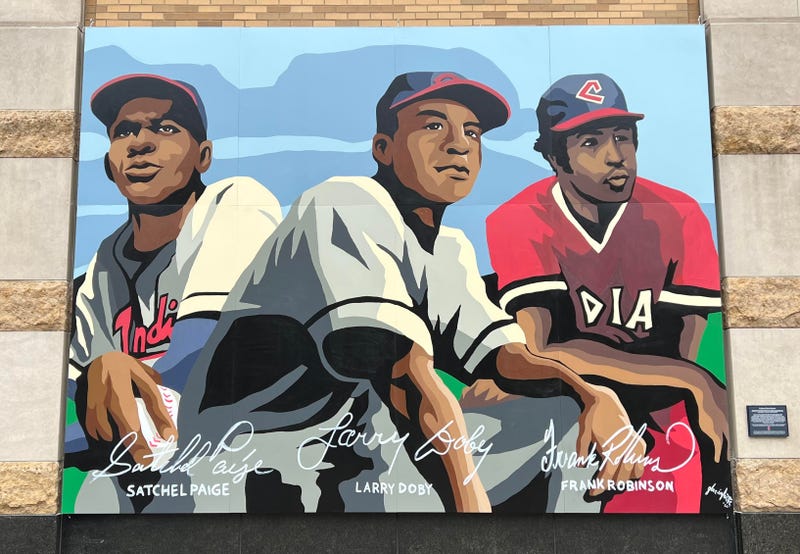 A new mural honoring Larry Doby, Satchell Paige and Frank Robinson commemorating the impact on Major League Baseball the three had as members of the Indians was unveiled on July 1, 2022. Photo credit Daryl Ruiter-92.3 The Fan

Fun bunch – Francona doesn’t mind how loose his clubhouse is or the fact players play mini basketball, cards or chess.

“With COVID, the guidelines kind of changed, like we’re brining guys in groups and telling them when they could come in and I think the trainers and everybody really liked that,” Francona said. “They wanted to kind of keep [doing it] and I was like, if the players want to be here [let them]. I don’t care if they’re playing cards. I like the fact that maybe they want to be here. We’re not telling them they have to be but if they like being around the ballpark, good. They might learn something by accident.

Hedges update – Catcher Austin Hedges worked out Friday and appears to be getting closer to being able to return from the injured list.

“Today was a really important day for him,” Francona said. “You try to keep adding intensity and workload and making sure he handling everything and they keep giving him more so we’ll see.”

It’s unclear if Hedges will require a rehab assignment.

“Not because of baseball,” Francona said. “If he needed it as far as getting him through his symptoms, we would certainly do that. I don’t know if that’s necessary.”

Standing by – Outfielder Oscar Gonzalez underwent an MRI Friday after experiencing abdominal tightness that caused him to be a late scratch Thursday.

Washed out – Friday night’s game against the Yankees was rained out and will be made up Saturday as part of a split double header – 12:10 for Game 1 and 6:10 for Game 2.

Francona was asked for his forecast hours before the scheduled first pitch and he authored a gem of a response.

“Depends whose phone you look at. My phone doesn’t look good but my phone is never right,” Francona said. “I got like an iPhone 1.”

Friday night's postponement was the 10th of the season, ninth due to weather and eighth at home.