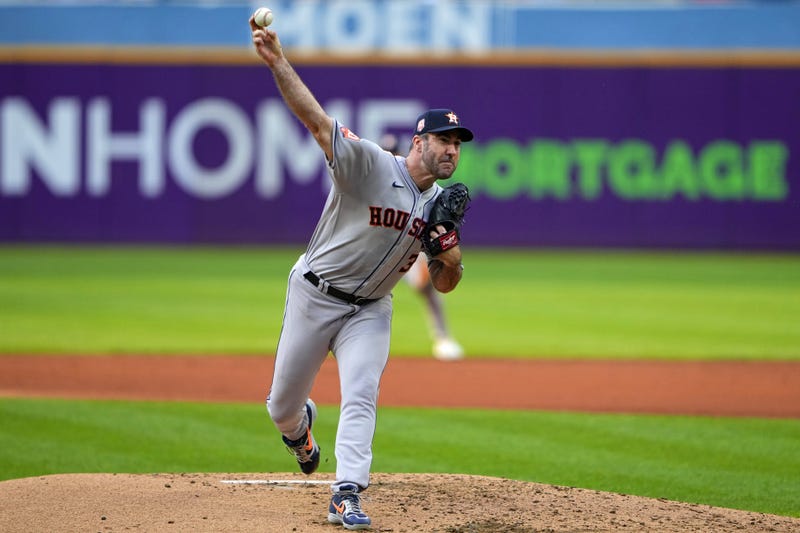 CLEVELAND, Ohio - Justin Verlander allowed just two hits over six shutout innings in what would be the Houston Astros’ 6-0 victory over the Cleveland Guardians on Thursday night at Progressive Field.

The Astros (69-38) allowed just three total hits to the Guardians, who fell to 54-51 with the loss. Verlander, who struck out five while walking one in the start, earned his MLB-leading 15th win of the season.

“As advertised,” Guardians manager Terry Francona described Verlander following the contest. “I thought our guys actually had some pretty good at-bats. I know we didn’t have much to show for it, but I thought we made him work a little bit.”

Zach Plesac (2-10) shouldered heavy duty over the first three innings, eventually throwing for 99 pitches through 4.1 innings of work. During that span, the Astros recorded seven hits and five walks off the veteran right-hander.

“There’s a ton of traffic right from the get-go,” Francona mentioned on Plesac. “I thought he competed so well just [in] those first three innings.”

“When the guys were on base, we did what we could to control the damage,” Plesac added postgame. “Then you look up, you’re at ninety pitches, and it’s the [5th inning]…my hands [are] tied.”

Plesac worked his way out of jams in both of the first two innings, before he allowed a run on a Chas McCormick infield single in the top of the 3rd. McCormick would also tag the Guardians’ bullpen by knocking a 5th-inning 2-run double off Bryan Shaw, and later a solo home run off Kirk McCarty in the 7th. Martín Maldonado - who matched McCormick with three RBIs for the contest - also hit a solo shot off McCarty, who worked the final three innings for Cleveland.

One positive for the Guardians offense was Steven Kwan’s late single that extended the rookie’s hitting streak to 18 games, which tied J.D. Martinez for the A.L.’s longest such streak this season.

The Guardians are set to play the Astros again on Friday night, with Francona naming Hunter Gaddis as the fill-in starter. Gaddis, a 2019 5th-round draft pick for Cleveland, is 5-3 in the minor leagues this season. Framber Valdez (9-4, 2.80 ERA) is slated to start for Houston.