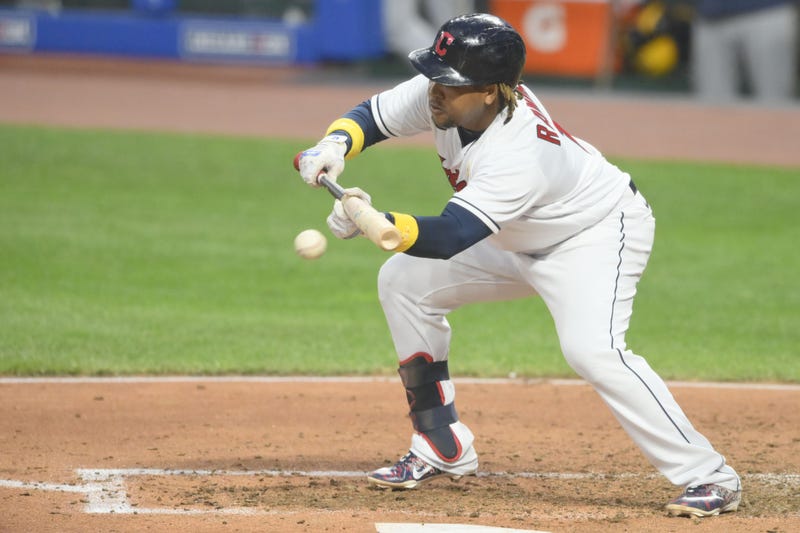 Cleveland Indians third baseman Jose Ramirez (11) bunts for a base hit in the third inning against the Milwaukee Brewers at Progressive Field. Photo credit David Richard-USA TODAY
By Tim Grattan

CLEVELAND (92.3 The Fan) – Jose Ramirez is out for Tuesday's game against the Kansas City Royals.

The Indians announced the two-time All-Star is day-to-day with a bruised left thumb. Ramirez did get an MRI on his left thumb, and the results showed an injured muscle.

"He's been working through it on-and-off for the last couple weeks and he continues to be sore," Indians team president Chris Antonetti said before Tuesday's game against the Kansas City Royals.
"We're thinking of giving him a day or two to help him get a little better."

Ramirez has a .248 batting average this season with 9 home runs and 26 RBIs for Cleveland. Still, as a switch hitter, the thumb is giving problems while batting on one side of the plate.

Ramirez left Monday's night game in the sixth inning with left thumb discomfort. Mike Freeman will take Ramirez's spot in the batting order for tonight's game against the Royals. Freeman will bat second and play third base.

Antonetti gave another update on the health of Indians manager Terry Francona, who is still recovering from blood clots.

"He's been around the ballpark earlier in the day to do some of his rehab to build up his stretch and he's on the path to recover."

There is still no timetable when Francona will rejoin the club as the manager but has been at Progressive Field to continue his rehab.
Francona has been using the team pool at the ballpark as part of the rehab process.

On non-busy days, Antonetti has been checking on other teams around the American League, including scoreboard watching, to see nightly outcomes of games due to the MLB playoffs starting less than three weeks.

"Last week – when we haven't had major crisis going on – we've gone back to more of the normal things of the season and that involves scoreboard watching," he said. "We're all hyper completive; we do this because we want to win games and win a World Series. We naturally pay attention to the standings this time of year and this year has been no different."

This year's playoffs will have 16 teams – eight in each league -- to make the postseason, instead of the usual 10 teams. According to FanGraphs, the Indians are 99.9 percent of making the playoffs and 47.5 to win the A.L. Central.