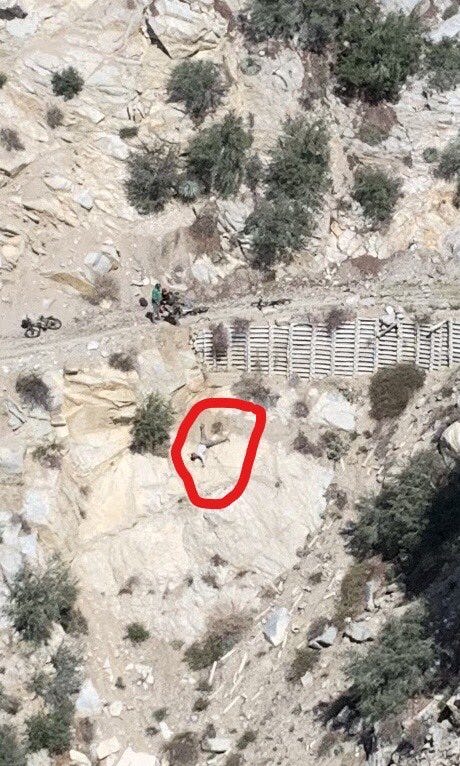 It was a dramatic rescue off of the Mount Wilson Toll Road in the Angeles Forest Thursday.

A mountain biker fell off the side of a cliff by the Mount Wilson Toll Road and ended up hanging upside down by a rope around his ankle.  His friends called for help, and Rescue Five, the LA County Sheriff's rescue helicopter, flew to the scene.

"We didn't know he was face down until we actually rolled up and saw him down below and we were like 'Oh man this guy is in a bad spot, a really, really bad spot.' He couldn't move. He was literally stuck while he was down there. They had thrown him like...a small rope, it was real thin and somehow he was able to attach it to his ankle and they used that to keep him from sliding," Aleman says.

Aleman tells KNX he rappelled down to where the man's two friends were standing, at the top of the cliff. He had them hold onto his rope as he lowered himself down to the mountain biker, strapped the two of them together, and brought him down to safety.

The mountain biker is fine and definitely has a story to tell his friends.

BREAKING -Mt bike rider falls over the side, dangles from side of cliff, Mt Wilson Toll Road, Angeles Forest. #LASD Air Rescue 5 inserts LASD SEB Tactical Medics nearby to rappel on rope down to victim. They secure victim and are hoisted in aircraft and flown to safety. pic.twitter.com/QbnzSQ6Y1q