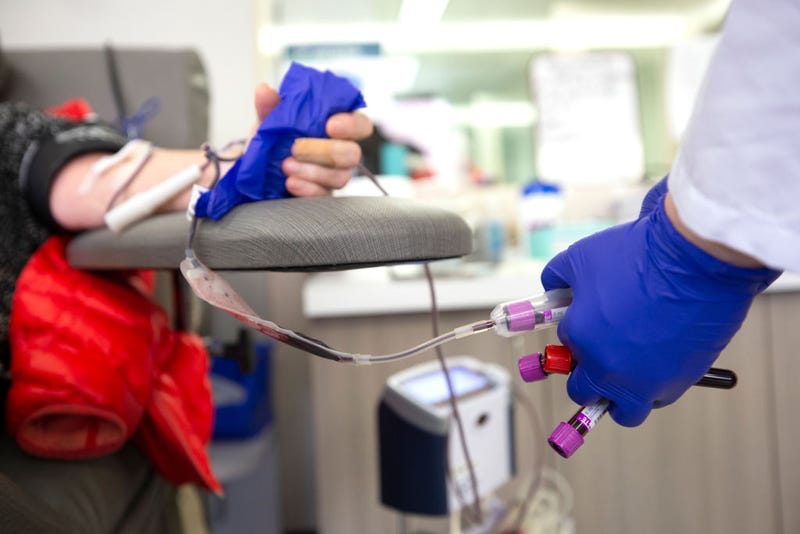 People donate blood at Bloodworks Northwest in 2020. The LA LGBT Center will help recruit hundreds of people to participate in a pilot study launched by three of the nation's largest blood centers in an effort to change policy that prevents most gay and bisexual men from donating blood. Photo credit Photo by Karen Ducey/Getty Images
By City News Service

LOS ANGELES (CNS) - The Los Angeles LGBT Center announced Wednesday it will help recruit hundreds of people to participate in a pilot study launched by three of the nation's largest blood centers in an effort to change policy that prevents most gay and bisexual men from donating blood.

The study, funded through a contract with the U.S. Food and Drug Administration, is focused on evaluating alternatives to the FDA's current blood donor "deferral" policy that men be deferred from donating blood for three months following the most recent sexual contact with another man.

The FDA revised the deferral policy from one year to three months just over a year ago.

"The elimination of the FDA's archaic blood donation policy for gay and bi men is long overdue," said Dr. Robert Bolan, the center's chief medical officer.
"The decades-old policy was enacted at a time when there was little science on the mechanisms of HIV transmission and the epidemic was concentrated in the gay community."

Bolan noted that the center is eager to contribute through the study to "ending the stigma surrounding HIV and AIDS and the discrimination that targets gay and bisexual men."

The center is one of eight LGBT centers nationwide each responsible for recruiting 250 to 300 gay and bisexual men between 18 and 39 years old for the study by Vitalant, OneBlood and the American Red Cross, which collectively represent about 60% of the U.S. blood supply.

Study participants will have a blood sample drawn for HIV testing and answer questions designed to determine individual HIV risk factors. The study will assess if the questions related to behavior are effective in distinguishing between MSM who have recently tested positive for HIV and those who have not, and help to determine the next steps to modify the donor history questionnaire.

"If the scientific evidence supports the use of the different questions, it could mean gay and bisexual men who present to donate would be assessed based upon their own individual risk for HIV infection and not according to when their last sexual contact with another man occurred," said Susan Stramer, vice president of scientific affairs with American Red Cross Biomedical Services.

Study data will be submitted to the FDA, which will review the findings and determine the next steps.