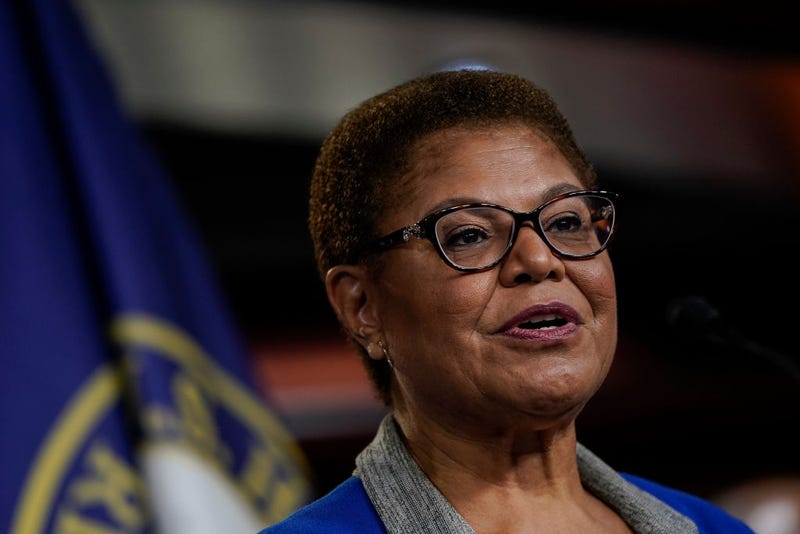 Bass announced her candidacy on Monday, writing on social media, "With my whole heart, I'm ready. Let's do this -- together. I'm running for mayor."

With my whole heart, I'm ready. Let's do this -- together.

In a statement, Bass described the city's homelessness crisis as one of her main reasons for joining the race. “Our city is facing a public health, safety and economic crisis in homelessness that has evolved into a humanitarian emergency,” she said.

Her announcement follows a weekend of speculation after a report by the Washington Post Friday said she was set to announce that she would join the 2022 mayoral race.

Bass represents the 37th Congressional district, which includes Culver City, Inglewood and neighborhoods in the city of L.A.

“I would probably put her in the column of frontrunner out of the gate. Karen Bass is a long-time presence in California politics. She was a speaker in the legislature. She has the resume certainly," he said.

Bass is currently serving her sixth term as a congresswoman, but she was a California assembly member before that. In 2008, Bass became the first-ever African-American woman to serve as speaker of a state legislature in the U.S.

Korinke said because of her past offices Bass has a big advantage in fundraising. She can reach out to donors in Washington and Sacramento as well as L.A.

And political analyst Jack Pitney of Claremont McKenna College told KNX that it’s a very telling moment for Bass to choose to leave the national stage.

“If she thought that Democrats were locked to maintain control of the House of Representatives, the case for staying there would be a lot stronger. But as it stands now, Republicans have a better than even chance of getting control,” Pitney said.

“As she knows from experience, it doesn’t constitute a lot of fun to be in the minority in the House of Representatives.”

However, Bass said she was not thinking about running for the job until earlier this summer when current Mayor Eric Garcetti was tapped as the U.S. ambassador to India.

Bass told KPCC/LAist last month that she was focused on running for reelection for Congress. But, the results of a poll from a California-based public opinion research firm on Aug. 23 may have lead to a change of heart.

"I was planning to run for reelection," she told KPCC. "I am evaluating the situation now."

Ahead of Monday's announcement, Bass spokesman Zach Seidl said in a statement, “Los Angeles is facing a humanitarian crisis in homelessness and a public health crisis in the disproportionate impact this pandemic has had on Angelenos. She does not want to see these two issues tear the city apart. Los Angeles has to come together. That’s why the Congresswoman is considering a run for mayor.”