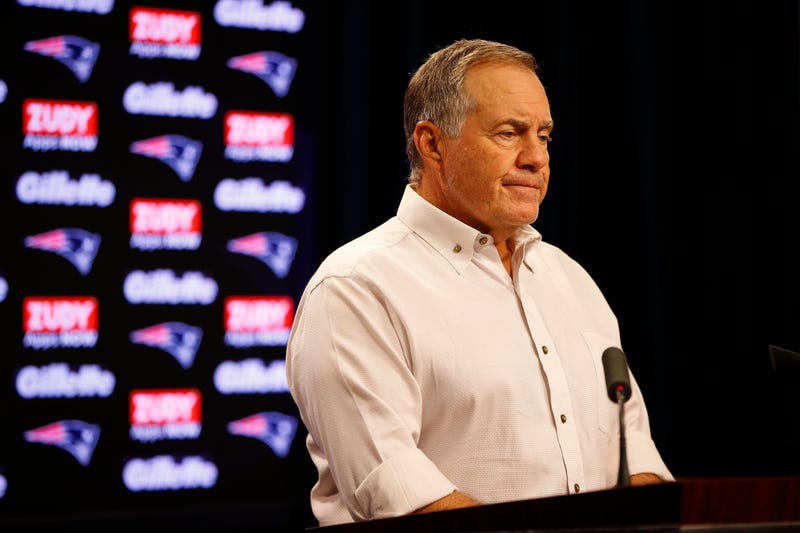 By Tuesday night though, you have to wonder if the full weight of entering the AB vortex had swiftly come to rest on the Patriots' shoulders.

Repulsively detailed accusations of sexual assault against your shiny new toy will do that, I suppose.

Come Wednesday afternoon, with Bill Belichick and Tom Brady squirming behind the podium at Gillette Stadium, refusing to answer questions about Brown, you could see that The AB Experience - a thrill ride best encountered on an empty stomach - was already ramping up to uncomfortable speeds.

You signed up for it, New England.

Despite all of this and then some, the New England Patriots looked at Brown, discussed amongst themselves, and felt that they'd be proud to employ him.

I suppose we shouldn't be surprised. They've got a defensive back on their roster who's currently under indictment for drug trafficking, so the "Patriot Way" seems to be about little more than winning football games.

Oh sure, Brady will feign interest in Brown as a person. He'll pretend the idea of having Brown live in his home until he finds his own place doesn't scare him to death. But in the end, Brady's first interaction with Brown was undoubtedly the same as it is with every new teammate. He walks up to them -sometimes at their locker, sometimes in a hallway or meeting room or on the practice field, sometimes oddly enough in the bathroom- and makes intense eye contact before saying something to the extent of "I just love to win, ya know what I mean? I love to WIN."

That's ultimately what any so called "Patriot Way" is really about: WINNING. Winning at ANY cost. Just check the videotape (before the commissioner destroys it).

An unadulterated pursuit of victories has led Robert Kraft, Belichick, Brady, and the entire New England organization down shady paths in the past, whether it be out-and-out cheating or bringing in players with checkered backgrounds. It's always worked out for them, though. They rarely, if ever, have been dragged down by distractions. Eventually, the same may happen with Brown. Or it could explode into the disaster so many of us expect it to, as Brown continues to melt down in more remarkable ways seemingly every day.

Either way, The AB Experience is only just beginning for the Patriots.

sports
Bears place bid to purchase horse racing site ahead of potential move from Soldier Field
music
'WKRP in Cincinnati' star Frank Bonner dies at age 79
music
Did Mariah Carey just mock Eminem during her 'Obsessed' anniversary?
music
Jeannie Mai says 'trust' and 'hot and heavy sex' are keys to her marriage with Jeezy
music
A 30th anniversary edition of Nirvana's 'Nevermind' is coming, according to Krist Novoselic
sports
Kevin Durant’s father tried to pitch him on playing for Knicks in 2019