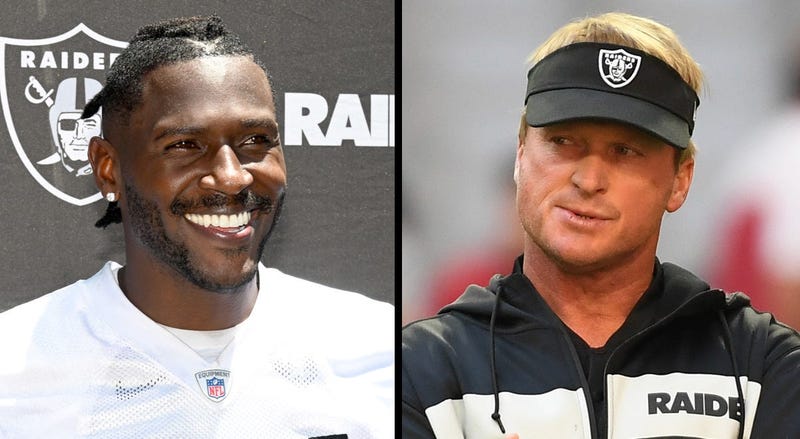 And Brown hasn’t played a game for the team yet.

He hasn’t really practiced all that much.

Heck, can they even find him? Do they know where the wide receiver is?

Is he in the Bay Area or is he in Florida?

Is he really even an official Oakland Raider?

All I know is this: Brown is already the most powerful person in black and silver and he is making both Gruden and general manager Mike Mayock look positively silly.

Brown has already succeeded --- again, without catching one pass --- in getting two very good football men who promised to change the culture of the Raiders to kowtow to him.

What a world we live in. Look, I don’t mind that athletes are more powerful than coaches. It is what it is, it isn’t 1955 anymore and athletes are the ones who carry the freight and risk the big injury --- especially in football. But this situation is absurd, and it all really revolves, for me at least, around one thing that Gruden said over this past weekend.

“There’s been a lot of reports out there; I can’t say I agree with all of them,” Gruden said. “This foot injury wasn’t his fault, and it’s a serious injury. … And the helmet thing is a personal matter to him … and we’re supporting him.”

What nonsense from Gruden.

First, the cold feet issue with Brown. I mean, feet so cold that reportedly he injured them severely in one of those treatment chambers. I’d love to know how failing to wear the proper protective footwear inside such a chamber wasn’t Antonio Brown’s fault. Brown has been in one of those cryotherapy chambers before and if he didn’t understand the protocol this time to avoid frostbite, that is certainly on him.

If he knew the decorum and elected to ignore it, that is even more on him.

Either way, Coach Gruden, the issue of the frozen and peeling feet is certainly the fault of Antonio Brown. Those feet are his moneymakers and he’s reckless to not take all the precautions in the world to protect them.

Now to the second part of the quote --- the part where Gruden makes a point to say the Raiders are supporting Brown in his fight to wear a helmet that isn’t permissible by NFL rules.

Why? Why on Earth would a head coach in a league that has fought so hard for player safety align himself with the one guy in the league who is refusing to play by the rules and, in a sense by doing so, ignore every single other player in the NFL who is doing things the right way in regard to the helmet rule.

Gruden has been rendered impotent.

Gruden has had his knees whacked down and he’s nothing but feeble and powerless at this point.

The Oakland Raiders have yet to play a regular season game in the Antonio Brown Era --- and Brown isn’t even practicing with the team --- and he has proven to be a million times more powerful than the coach and general manager.

Good luck with that, Jon Gruden.

Good luck with that, Mr. Mayock.

I have a feeling you guys sold your souls to the wrong devil.