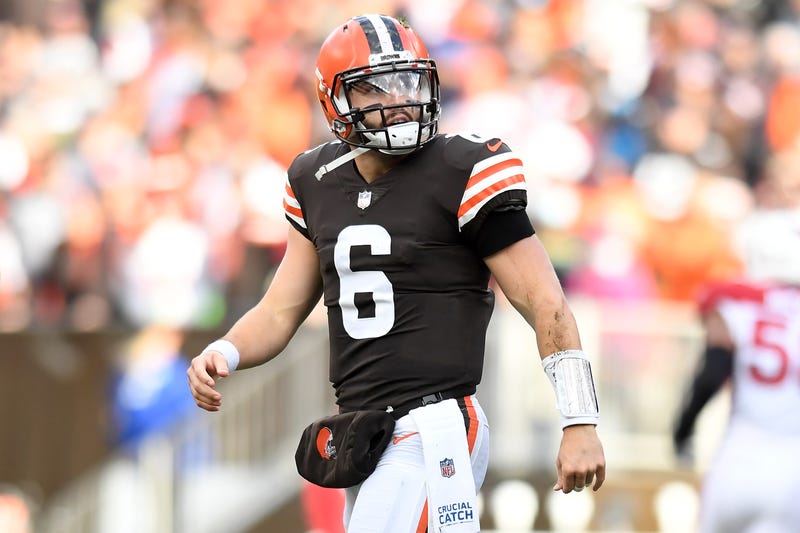 Cleveland Browns quarterback Baker Mayfield told Jay Glazer of Fox Sports on Thursday that, in addition to the torn labrum in his non-throwing shoulder, he also fractured his humerus, which is preventing his rotator cuff from firing.

Due to the injury -- which was initially suffered in Week 2 and reaggravated this past weekend -- Mayfield didn't play in the Browns' 17-14 win over the Denver Broncos on Thursday night. So, when could Mayfield return to action? Perhaps as soon as next week, according to former NFL doctor David Chao.

"If we're talking about structural healing, of course it's 4-6 weeks. But it's not structural healing here," Chao told The Zach Gelb Show on Thursday. "It's a dent on the back of the ball of the shoulder that's not anatomic, there's no articular cartilage there. The designation of 'probable' doesn't exist anymore, but I'd lean toward probable. Even stronger than questionable for next week, based on the fact he returned to the game, what kind of fracture this likely is."

According to a recent report from NFL Network insider Ian Rapoport, Mayfield is expected to require surgery to repair the torn labrum, but the team hopes that he can play through pain and wait for an offseason procedure. Of course, plans are fluid -- only time will tell if the former first overall pick gets cleared.

Browns backup quarterback Case Keenum was serviceable against Denver, completing 21 of 33 passes for 199 yards with a touchdown and no turnovers. Mayfield had started 51 straight games for Cleveland, dating back to Week 3 of his rookie season in 2018.

Cleveland (4-3) will host the Pittsburgh Steelers (3-3) in a Week 8 matchup on Sunday, Oct. 31. According to FiveThirtyEight's projections, the Browns have a 55-percent chance to reach the playoffs and an 13-percent chance to win the AFC North.

The entire Mayfield conversation between Chao and Gelb can be accessed in the audio player above.