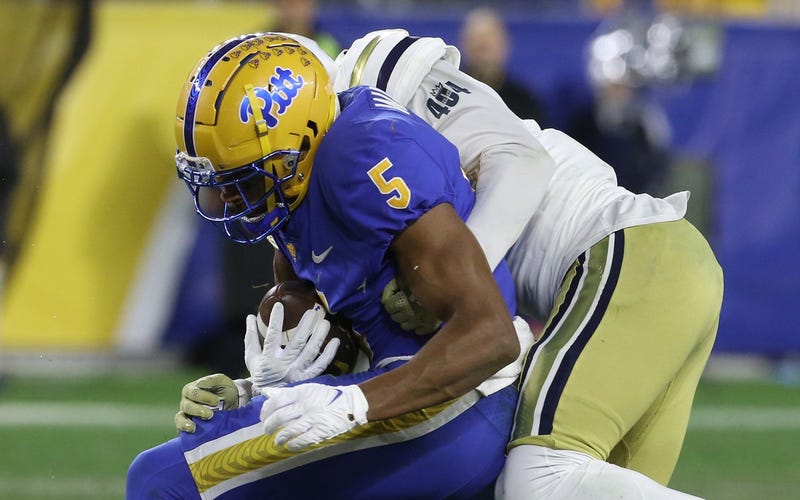 PITTSBURGH (93.7 The Fan) – The worst conference loss under Pat Narduzzi and it comes to open ACC play. Narduzzi hit on the reason just three sentences into his post-game remarks—turnovers. Now how will they move forward from a ‘disappointing performance’?

It was three turnovers in a row and an offense that quarterback Kedon Slovis said ‘couldn’t get into rhythm’.  He said there were a lot of different reasons for their inconsistencies, but he put the blame on him.  It was an offense that didn’t reach double-digit passing yards until they got 27 minutes into the game.

He said he needed to take advantage of certain passing situations better.  Slovis believes it wasn’t the play-calling from offensive coordinator Frank Cignetti, rather it was a lack of execution.  Whether that’s a quarterback taking the fall or reality, they will find out reviewing the tape.

“Walking off the field, I felt like we have to be better as an offense if we want to reach the goals and aspirations we have this year,” Slovis said.

It wasn’t just the offense that kept the Panthers from winning their first ACC game.  There were several game-changing opportunities the Panthers defense dropped.  It’s plays Narduzzi said they have to make.

“We missed 4 or 5 opportunities for turnovers,” said linebacker SirVocea Dennis.  “We just got to do a better job.  I don’t know what else to say.  We just have to capitalize on every opportunity.  We don’t want to miss opportunities.  If we miss opportunities, games like that happen.”

Then similar to what Pittsburgh fans have seen from the Steelers, they couldn’t make a key stop.  It’s a Yellow Jackets team that had scored 20 points in three games against Power 5 teams and had not scored in the fourth quarter all year.  Yet the Yellow Jackets scored 17 points.

“It starts with me,” Narduzzi said. “There's no finger pointing in our locker room. It starts with me. Number one, obviously I didn't do a good enough job getting them ready.”

“But all our goals are still ahead of us,” Narduzzi said. “I think it will make them a little hungrier. We have to take it. We have to take what we got, what we paid for, and it just wasn't good enough.

“We still have to play our best football,” Dennis said.  “We have to come together and play as a team.  We have to also capitalize on opportunities.  The guys know we have to do better.  We want to get it done and we will.”