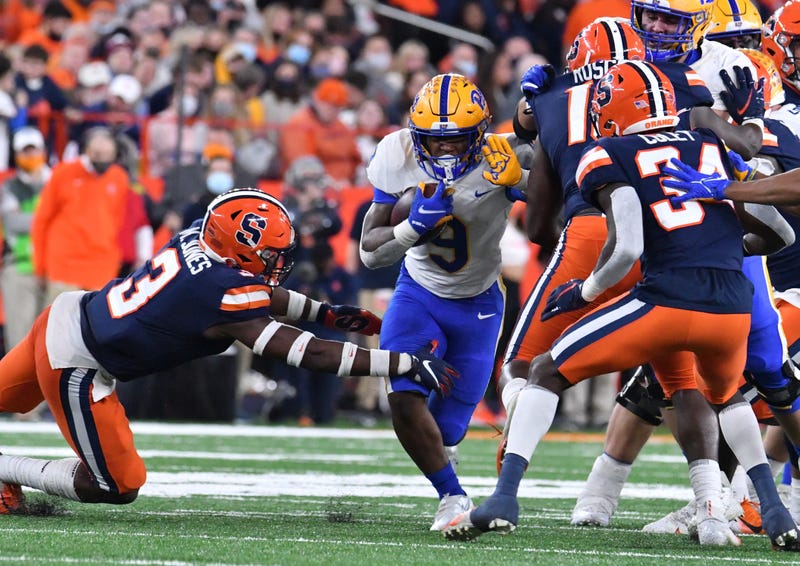 SYRACUSE (93.7 The Fan) – It’s the first time in four decades that Pitt football won 10 games in a regular season. Panthers tune-up for the ACC Championship game, a 31-14 win at Syracuse Saturday night.

“My hats go off to the guys in the locker room, they got it done,” Pitt head coach Pat Narduzzi said on 93.7 The Fan and the Pitt Panthers Radio Network.  “Our kids have had a great attitude of taking one game at a time.  Sometimes it’s hard to take it one game at a time when you have a championship game the next week, 10 wins is unbelievable.”

Jordan Addison caught a pair of the touchdowns and now with 17 is second on the single-season TD reception list, five behind Larry Fitzgerald’s record.

Panthers played without starting tailback Israel Abanikanda, who stayed back in Pittsburgh with an undisclosed injury.  Vincent Davis rushed for 79 yards and Rodney Hammond 51 yards.

Syracuse scored on its opening drive taking nearly half of the first quarter.  Pitt would answer halfway through the second quarter, Pickett to Hammond from 15 yards.  Then Pickett to Addison for 25-yards, Bartholomew for 4-yards and Addison again from five yards out.

“I told you during the week,” Narduzzi said.  “I don’t expect them to run the ball.  They tried to run it.  We made them one dimensional.  There was talk of him (Tucker) being a Heisman Trophy guy, I guess not tonight.  It’s all Kenny Pickett.”

The top four tacklers for the Panthers, all linebackers-Cam Bright 8, John Petrishen and Phil Campbell with 7 and SirVocea Dennis with 4.  Dennis also recovered a fumble and as a team, Pitt had 10 tackles for loss.

Pitt faces 10-2 Wake Forest in the ACC Championship game, Saturday. December 4.  Hear it with pregame starting at 4p on 93.7 The Fan.