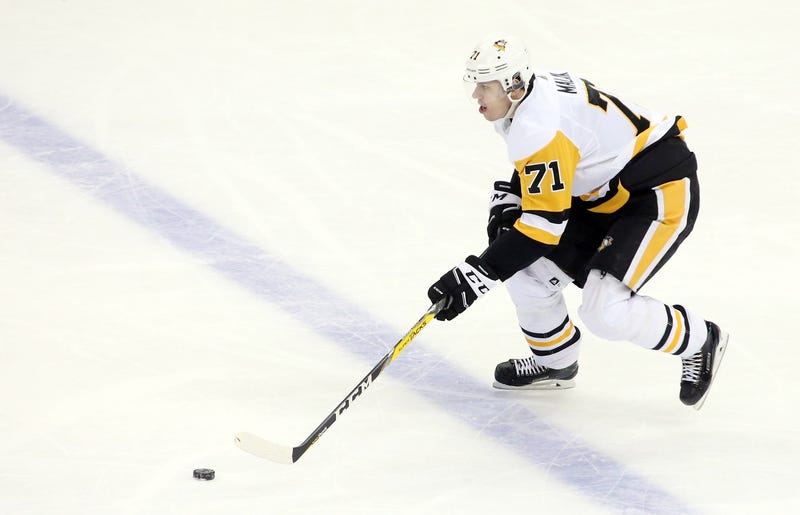 PITTSBURGH (93.7 The Fan) – Evgeni Malkin didn’t have a point in his first shift of the season, but his linemate did. We would have to wait until the second period for Malkin to score his first goal of 2022, and then his second.

Moved from center to wing because of his experience, Jeff Carter got a feed from a Marcus Pettersson steal and fired it home seconds in the first period in Anaheim Tuesday.  In his first appearance, Malkin was a plus one.

Early in the second period, Malkin back on the top power play unit and fired one from the top under the cross bar and the legs of a leaping Sidney Crosby in front. Later in the second, Malkin got in front of the net and deflected a shot by defenseman John Marino for his second goal of the game.

Malkin would later add an assist on a Carter empty-net goal as the Pens beat the Ducks 4-1.

The 35-year-old coming off offseason knee surgery, missing since May 8.  In the 33 games Malkin played in last season, the center had 28 points including career point 1,100.

He has the third most points in Penguins history with 1,107 in 941 games. He is 14 goals from trying Jaromir Jagr for second on the Pens all-time goals list with 440. Malkin tied Mario Lemieux for the second-most game-winning goals in team history with 74.

Malkin hitting the ice on Tuesday marks his 16th season, tying him with Kris Letang and both are one year behind Sidney Crosby.  No trio in NHL history has played as many years together.