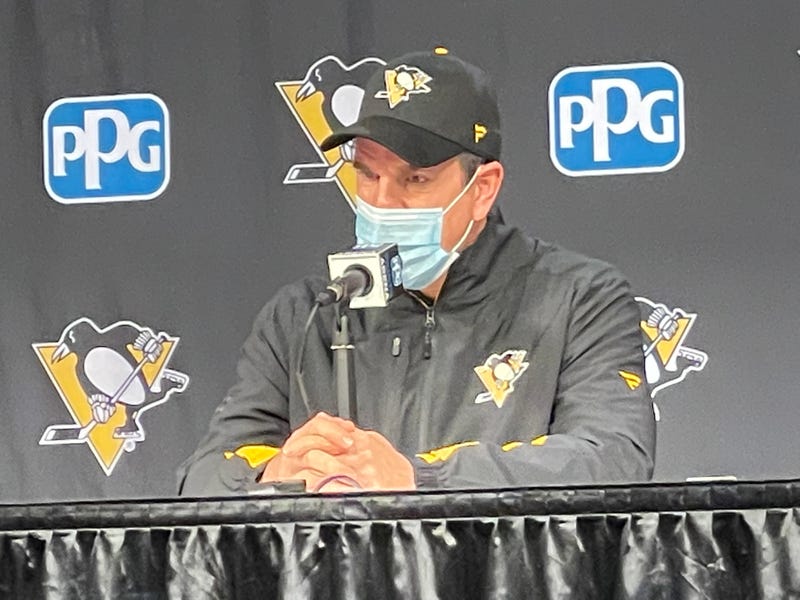 PITTSBURGH (93.7 The Fan) – Pens head coach Mike Sullivan didn’t like the hit from Winnipeg’s Brenden Dillon initially, he remains upset with it after having time to watch replays.

Dillon finished a check against Pens center Teddy Blueger against the boards on Sunday afternoon. Blueger immediately had to leave the game and it ended up breaking his jaw. Now the team will be without a key bottom six forward for six to eight weeks.

The NHL isn't even going to review the hit.

“When I read the rule book and I watch the hit,” Sullivan said Tuesday.  “It’s the letter of the law.  The main point of contact was his head, hence a broken jaw.”

“Unnecessary extension of the body outward and upward, it appeared to me that took place.  My understanding of the rule & watching the hit is very different from how the league saw it.”

“He’s doing alright,” said forward Zach Aston-Reese who talked with Blueger.  “It kind of sucks.  Its’ unfortunate the league didn’t do anything about the hit either.  Whether he meant to do it or not, it still happened.  Teddy is going to be missing an extended amount of time here.”

Blueger played in 40 games, was a goal and five points from career-highs.  He also plays key minutes on special teams and against other team’s top lines.

“Teddy is a good player for us,” Sullivan said.  “He’s one of our best penalty killers.  He’s having a terrific year for us.  He makes our bottom six a whole lot more difficult to play against.  Once again we will have to fill the void.”

“We are going to be missing him for sure, especially on the PK,” Aston-Reese said.  “He’s a good faceoff guy.  Brian Boyle is going to be filling in that spot.  He’s done a good job all year whether he’s been on a wing or at center.  Go about it the same way we’ve done it all year with a next man up mentality.  It’s been working for us.”

“You just have to do what you are supposed to do,” Boyle said of filling the spot.  “It’s put out in front of us how to defend.  We have a system in place.  He’s obviously a huge part of that, a penalty killer.  He anchors the line that often nights trying to defend against team’s top lines.  You have to embrace that challenge and have pride in it.”

The 37-year-old Boyle has played 28 games with four goals and an assist and is a minus one in his first year with the Pens.  He will likely center a line with Aston-Reese and Dominik Simon.

“I think Brian is very capable,” Sullivan said.  “He understands what his role is.  He’s a real sound positional player.  He’s pretty good on the faceoffs, he’s a good shot blocker.  He’s hard to play against.  He can help us fill that void.”

“Boyle has been in this league for so long,” Aston-Reese said.  “He definitely gets his role.  He takes pride in the little details of the game.  I don’t think it will be too much of a challenge.”