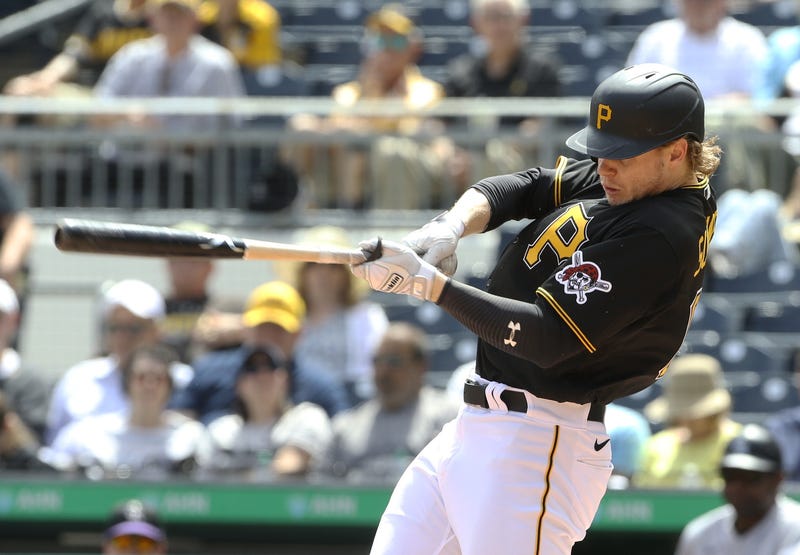 PITTSBURGH (93.7 The Fan) – It’s one of the more improbable stories of the start of the season for the Pirates. Outfielder Jack Suwinski is leading all National League rookies in home runs.

Suwinski hit his fifth homer just this month in a 10-5 win over the Rockies on Wednesday afternoon.  Only Jeremy Pena from the Astros has hit more in the majors and Suwinski has played in a dozen fewer games.

“I think he’s going to hit the ball out of the ballpark,” said Pirates Manager Derek Shelton.  “He has the ability.  He has that little bit of finish to his swing where there is loft.  He backspins a lot of balls on the pull side.  When you have a little bit of loft at the end of your swing and backspin, balls are going to get out of the ballpark.”

What might add to the longevity of what we are witnessing with 6’2”, 215-pound Suwinski is that he’s not forcing it.  He’s not trying to hit fly balls or balls out of the park, he’s trying to hit it hard on a line.

“I don’t really try to create any launch angle or lift, I think it kind of happens naturally based on how my swing moves,” Suwinski said.  “I need a good, tight swing.  I try never to swing too hard.  Sometimes when I’m swinging too hard, I take a step back and remember that I want to swing quick, not hard.  Stay nice and simple, and nice and easy.”

To that point, the 23-year-old never gives away an at bat and it showed on the homer over the Clemente Wall on Wednesday.

“We’ve talked about he stays under control,” Shelton said.  “(It was a) nine-ten pitch at bat.  I think every pitch was 96 mph or above.  He just continued to battle, and battle and battle.  Got himself a pitch to hit in a 3-2 count and squared it up.  This kid doesn’t get rattled very easily.”

“I think it goes back to routine, discipline and knowing what I need to stick too,” Suwinski said of early success.  “Everyone here has been super-helpful in teaching me and guiding me and giving me their outside views on what they see.  I appreciate their takes and I’m able to put that into the approach I have.  Just staying disciplined and calm and not getting too far ahead of myself.”

His number one advocate is Pirates hitting coach Andy Haines.  You can imagine the pressure on him.  The Pirates had scored 23 runs in the 12 games previous to Wednesday.  Almost all of their hitters are below their career averages and then he has to work with a number of rookies.

“He’s been great, super-encouraging, super-helpful,” Suwinski said.  “He’s always in the cage whether we are talking it out, working it out, feeling it out.  It’s great having your hitting coach encourage you at bat to at bat every time, the whole time.  It’s awesome.”

“Positivity in a hitting room and with a hitting coach is important,” Shelton said.  “When you have young players you have to stay positive.  I think that’s one of Andy’s greatest attributes is he stays positive.”

“It’s hard man.  I know, I’ve been there when you are not swinging the bats as well as you want and you have young kids who are learning.  I give credit to that group because I think they’ve stayed positive with him and never let him be in a situation where he’s doubted himself.”

“Just being open and honest with each other,” Suwinski said.  “Telling him what I need, he tells me what he thinks.  We just bounce things off each other.  Working with each other and being honest, I think that goes the longest way.  It’s about trust, honesty, commitment and relationship.”

He says Bryan Reynolds and Ben Gamel are veterans who set a good example of how to play the game.  Quickly though, Suwinski is starting to see familiar faces.  The Chicago native hasn’t been a full year in the Pirates organization after being acquired for infielder Adam Frazier last year, yet he knows guys at this level.  Cal Mitchell, who had two hits and another RBI on Wednesday, was his roommate early in the minors.  He played with current Pirates Roansy Contreras, Yerry De Los Santos, Diego Castillo and Rodolfo Castro.

Notes
·     De Los Santos made his MLB debut in the ninth giving up no runs, a hit, a walk and struck out two.
·     Josh VanMeter hit a 3-run homer on a 2-2 pitch in the 7th to give the Pirates a cushion.
·     Shelton praised the 3.1 innings from Mitch Keller in relief giving up a run on five hits and a walk.