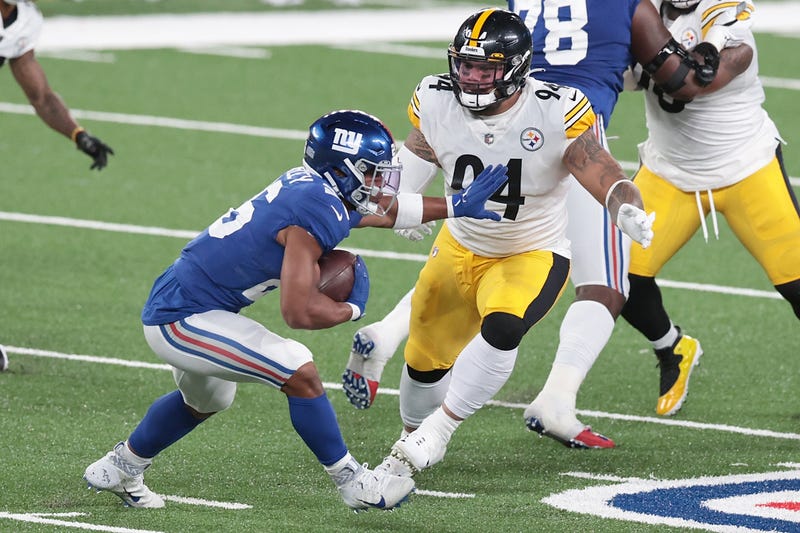 PITTSBURGH (93.7 The Fan) – Tyson Alualu found out this week he would no longer be starting. His answer was not to whine about it, but ask what he needs to do to get better.

“This is a humbling situation,” Alualu said.  “I got to look for ways to have humility & see where I need to get better.  I trust in the abilities that I have & the people around me.  I know I will come out better & it will be better for the team for sure.”

He’s not going to pout or point fingers, but said he will work just as hard to earn the trust of the coaches and his teammates.  In the end, the 35-year-old Alualu, who missed part of Steelers camp with a knee injury and most of last year, said instead of this depressing him, it will be a motivator.

“I understand this business, that’s just fuel to the fire of wanting to be the best version of myself,” said Alualu, who at the last minute this off-season spurned a contract to return to a now 2-1 Jacksonville team.  “I know if I work on that, I will be the best I can be for my team.”

It’s the other side for Montravius Adams, a former third-round pick he was released by the Saints last November and for two weeks wondered if he would continue to play in the NFL.  Then the Steelers took a chance and now he’s starting.

“It’s definitely an honor,” Adams said.  “For it to be a guy like Tyson, a polished veteran.  It means a lot.  Tyson and I have a great chemistry of teamwork.  We will keep moving if he was number one or if I was number one.”

“Tyson has been Tyson since I came in last year.  I was ready to play with him (and learn from) his off-the-field knowledge of the game.  I still have the opportunity to learn from him.”

Adams said he’s ready for the increased workload, but noted the defensive linemen play with a rotation between himself, Chris Wormley, Alualu and Larry Ogunjobi.  He thinks his time studying the playbook has really paid off.  Even missing all of the preseason games, he took that time to dive into the defense.

“Mentally I’ve taken a big step,” Adams said Wednesday.  “I haven’t really played as much as last year, yet (been able) to notice a lot of things.  I feel like I’ve gotten better in fundamentals, especially on runs and things like that.  Now its about acknowledging the pass, a lot of teams doing play-action.  Just being able to get out of the block and get some pressure.”

He says the Jets will lean on the run game with the likelihood of starting a second-year quarterback.  Adams says the Steelers need to be on their details and that’s where they’ve messed up at the end of the last two games.

It will be his fifth start as a Steeler, but first with everyone else healthy.  Adams had opportunities to sign elsewhere this off-season, but believed he was a good fit in Pittsburgh.  Now he’s shown enough to prove it as a starter.