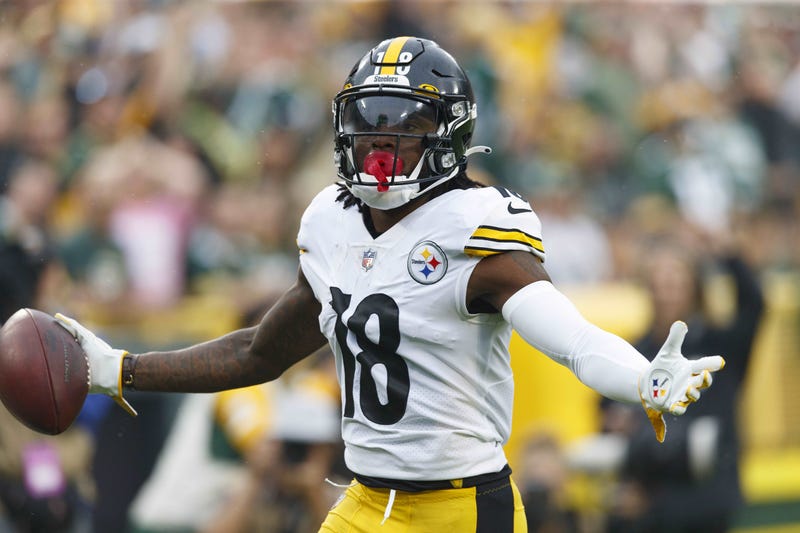 PITTSBURGH (93.7 The Fan) – According to multiple websites that track it, Steelers receiver Diontae Johnson is one of the most open receivers in the NFL. He explained Thursday where his mindset is with obvious signs of frustration.

A Pro Bowl receiver last year, according to fivethirdeight.com, only AJ Brown, Darius Slayton and Tyler Locker get open more frequently this year than Johnson.

“It shows that I work hard and what I do well I put on film consistently,” Johnson said. “It’s really no secret, it’s believing in yourself. Every time I step to the line I have a game plan and if that doesn’t work I have a counter move. I’m always ready, willing to work and willing to get better every day.”

But the results haven’t been there, just four catches on five targets for 21 yards on Sunday against the Bengals. He doesn’t have a receiving touchdown and no 100-yard games. Johnson is also working with his second starting quarterback this season and didn’t get much time in the first two months of the year with Kenny Pickett.

“Trying to see what I can do to try & get in his vision more,” Johnson said of increased catches from Pickett. “Get him to look my way more, not that it’s a bad thing with him not looking my way. Just trying to get more opportunities, that relationship will continue to grow. I’m not stressing, communicating is the big key.”

“He’s a guy we want to get the ball more,” said Steelers Offensive Coordinator Matt Canada. “He’s important to our offense. Kenny has to read it out and we will continue to work to get him the ball. We understand how talented he is.”

Pickett said he knows how great of a player he is. He said 100% Johnson is seeing more attention right now. Teams are scheming to take him away. He says moving him around would be a key.

Johnson said he’s talked to head coach Mike Tomlin about it. He knows the double teams are there and more are coming. Tomlin told him they are working to get some one-on-one opportunities against linebackers, that would mean him getting more time in the slot.

The other major point from Tomlin is don’t get frustrated, or as Johnson said ‘not stressing’.

“I can’t worry about trying to play great, just be myself and try not to press,” Johnson said Thursday. “The more you do that, you are not playing for the team, you are playing for yourself. I don’t want to go down that road. I want to be all-in with my guys.”

“If stuff isn’t going my way, continue to show that I’m getting open. Trying to help the team out any way I can. Not complain about it, that’s the toughest part. It’s football, I’m responding the right way and keep playing.”

Teammates telling 93.7 The Fan they aren’t concerned about Johnson being an issue. His emotion is just trying to make a play to help the team perform better.

“Just keep getting open and something is going to happen,” Johnson said. “They got to see you eventually. I always have to be ready. You never know when the ball is going to come to you. Can’t be worried about not getting the ball, just keep playing.”