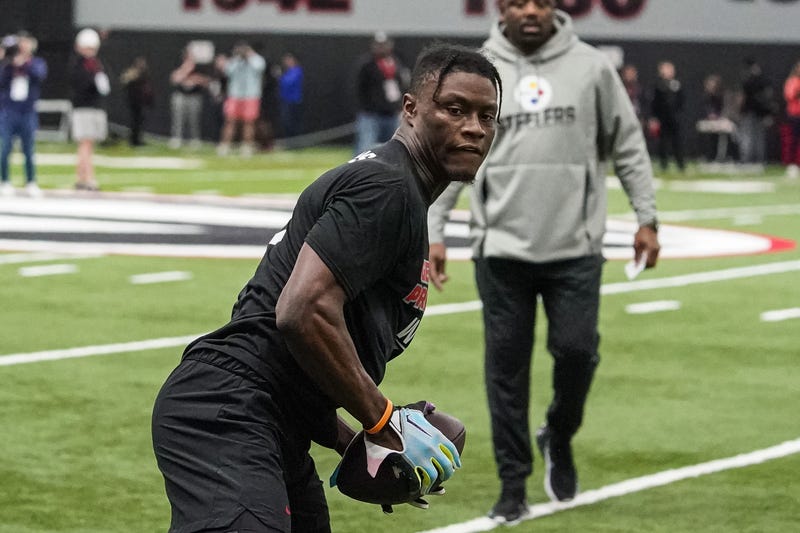 PITTSBURGH (93.7 The Fan) – There is not a rookie in the Steelers draft class who is more likely to start than receiver George Pickens.

Even Mike Tomlin, who is wary to pump the tires of any rookie, admitted early last year that Najee Harris was his starting tailback.  Even before the first official team offseason workout, Pickens is at least the team’s third best receiver.  He does it having the least amount of experience of any of the rookies.

Pickens played in just 24 games in college.  Compare that to the 46 games of fellow receiver Calvin Austin or the 52 games of Kenny Pickett.  He just turned 21 in March, yet is going to be counted on to do big things especially when you consider Diontae Johnson becomes a free agent next year and Chase Claypool has been inconsistent.

Rookie camp allowed Pickens time with Pickett saying ‘I think we will work very, very well’ and are ‘very compatible’.  He was excited about his first opportunity with the former Pitt QB and says he’s become quick friends with the fourth-round pick, Austin.

Beginning on Tuesday, Pickens will have his first opportunity to work with quarterbacks Mitch Trubisky and Mason Rudolph.  Also the first time to have Claypool and Johnson in the room, provided they show up for voluntary work.

“It’s not really a huge transition from SEC,” Pickens said of moving to the NFL.  “It’s been a great opportunity and a great journey to get to this point.”

It hasn’t been a smooth journey for the 6’3”, 200-pounder.  An ACL injury last March limited him to just five catches in four games with the Bulldogs last season, but he did average 21.4 yards a catching including a big reception against Alabama in the national title game.  The Steelers raved about his desire to work hard to get back to be a part of what he thought would be a special season.

Pickens says he’s 100% healthy now and ready to work, even if that means a lot of special teams to start.

“Doing what I have been doing my whole career, that’s just putting my head down and working,” Pickens said.  “That will put you in the best position to succeed.”

He already has some muscle on his frame and believes he’s the perfect fit to play in the AFC North.  He thinks the style of play between the Steelers, Ravens, Browns and Bengals is just what he is looking for.  So is what you typically see from a Pittsburgh offense.

“It’s kind of like Georgia,” Pickens said.  “We always had a pro-style offense.  Big Ben is not here, so of course a lot of things are going to change from the old Steelers.  I feel like we are progressing.”

In his second season and no longer needing to cater to Roethlisberger, offensive coordinator Matt Canada will likely had more wrinkles.  Those plans, however, will look to maximize the talents of a receiver who caught 90 passes in the SEC for 1,347 yards and 14 touchdowns.