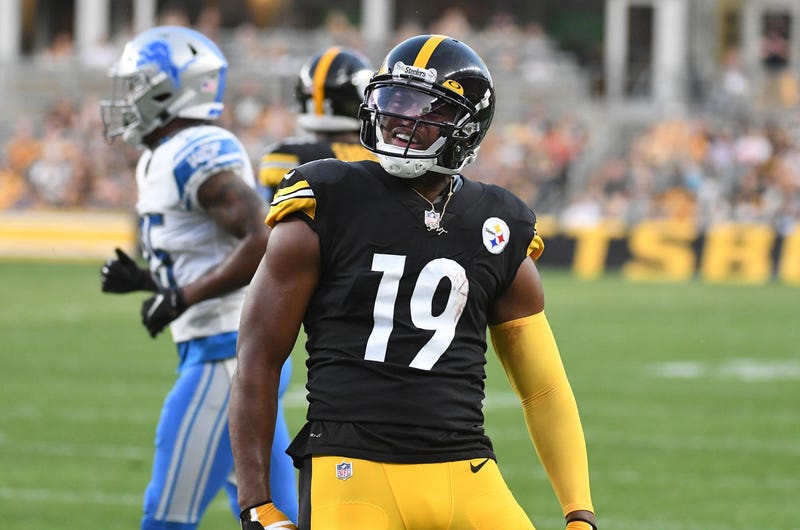 PITTSBURGH (93.7 The Fan) – Typically on a players’ first day back from injured reserve you know it will be a process to return. This feels different.

JuJu Smith-Schuster started his 21-day window to return to the active roster following a shoulder injury against Denver which sidelined him for the rest of the regular season.  Thursday receiver Diontae Johnson said Smith-Schuster ‘looked like he was ready’.

“It’s not (surprising),” said Steelers head coach Mike Tomlin of Smith-Schuster’s return to practice three days before a playoff game in Kansas City.  “He’s worked hard in rehabilitation and gotten himself to this point.”

“We simply started the 21-day window.  We will look at him, see how he feels and check his level of conditioning.  Good to have him out here, but its just part of the process.”

While Tomlin wasn’t surprised, Johnson was.

“I had no clue about it,” Johnson said after practice.  “We were just going out there, doing what we do.  I was surprised to see him out there today too.  In the locker room, I was like ‘yo, are you getting ready for something’ (as he was) putting on his cleats.”

“He brings back that positive energy that we need and he has always had, that he always brings.  You want to be around a guy like that who is all about football, all about his teammates.  Willing to do anything or the team.  He’s a people person too, there is never a dull moment when he is around.”

Tomlin said he wouldn’t quantify how much Smith-Schuster was able to do in practice Thursday.  Johnson said he looked smooth, still is strong with good hands and, again, looked like he was ready.

“I’m happy that he’s back,” Johnson said.  “If he gets the chance to play, I will be excited for him to do what he does, which is make plays. I’m sure everybody misses him doing his dances out there.  I was good just seeing him out there moving around again.”

“I don’t know that,” Tomlin said.  “We just started this 21-day window and what transpires out here and a lot of other questions are part of the equation.”

Could he make an impact?

In his last playoff game, Smith-Schuster caught 13 passes for 157 yards and a touchdown.

Tailback Najee Harris did not practice on Thursday, but Tomlin said they are scheduled to work him on Friday and that would be telling.  Harris missed the first two days due to an elbow injury.