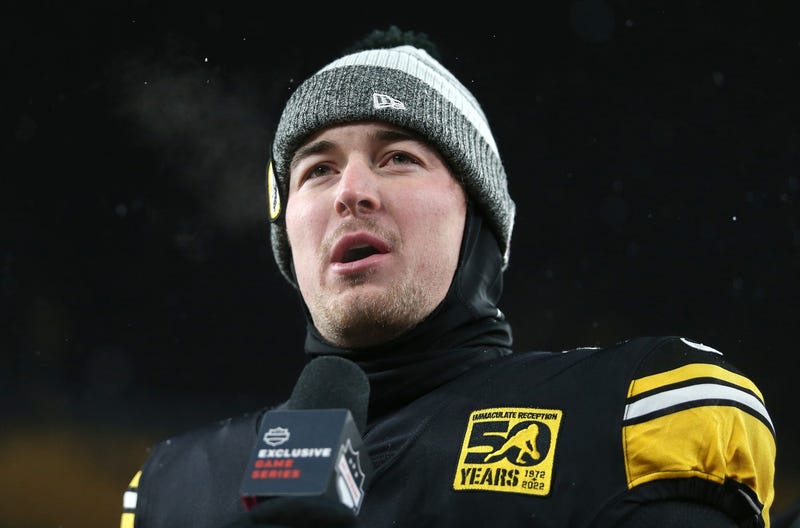 PITTSBURGH (93.7 The Fan) – After what turned out to be a crazy 13 months, Kenny Pickett is starting to soak it up a bit. He attended his first Penguins game on Friday night and will be back at the Pete for Pitt basketball on Wednesday. He will then head back to New Jersey and some family time before getting back to work.

Pickett joined fellow Pitt quarterback Pat Bostick during the 93.7 The Fan Panthers Insider show Saturday mornings 8-9a. The now Steelers QB admitted it was a big transition for him going from the Panthers to the NFL. He wasn’t really full go until later in the year.

The Steelers first-round pick threw eight interceptions in the first five games, then one in the last eight. He also won his last three starts and five of the last six. The only loss in that stretch was when he was knocked out of the Baltimore game after the second series. Even the negative of a second concussion came with lessons to build on for 2023.

“The pass rush is a lot faster at the pro level,” Pickett said on the Fan’s Panthers Insider Show. “You are scrambling at a faster pace than you were at the college level. The sense of urgency when you break contain. Those guys can change direction a lot faster than you can honestly. They are probably the best athletes on the field on the front four on the defensive side.”

“The more time I could buy to allow those guys on the field to get open, it just helps find some explosive plays and stay on the field.”

Struggling as an offense the first half of the season, Steelers scored more points and made those big, money-down plays in the last six games. And those money drives, leading a pair of late comebacks in wins against the Raiders and Ravens.

“It’s awesome having a year in the system,” Pickett told Pat Bostick on 93.7 The Fan Saturday. “Coming back next season, I know what to train. The timing and footwork that I’ll be using in my training with the system I was in. I was learning a lot last year and training it was all about the combine.”

“This offseason, I’m going to keep my speed and put some weight on. Definitely going to practice all the footwork I was learning this season. I think a full offseason of that, pocket presence and the mechanical stuff I do with (renowned QB coach) Tony Racioppi. I’m excited to take a big leap in year two.”

Pickett plans on aggressively meeting with his receivers during the offseason. He had limited opportunities in his rookie season in voluntary workouts, mandatory off-season work and even through most of training camp with two of their leading receivers.

“I was playing catchup with Diontae (Johnson) and Pat (Freiermuth),” Pickett said on 93.7 The Fan. “I had a really good rapport with George (Pickens), Connor Heyward, Calvin Austin. The guys I was playing with on Sundays in the back half of the year I really didn’t have as many reps. I think having a full offseason with those guys is going to be absolutely huge for us.”

For now, it’s turning it off.
Watching some hockey and he’s excited about a watching resurging Panthers basketball program.

“It’s a long season coming from Pitt, going through the draft process and then getting to the season and learning the playbook,” Pickett said. “Then having the longest season of my football career.”

“It was a lot of learning, taking it a day at a time. I definitely enjoyed it. It was an unbelievable learning experience. A lot to build off of for year two.”