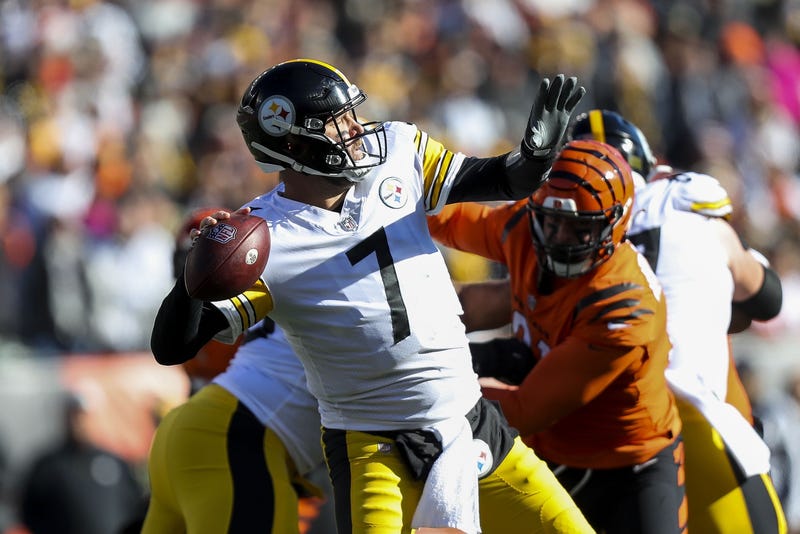 CINCINNATI (93.7 The Fan) – Ben Roethlisberger threw a pair of interceptions, one returned for a touchdown in the first half. The 39-year-old has three reported injuries this year including a right shoulder and a hip injury. Not long ago he suffered from COVID-19. Yet with the game out of reach in the third quarter, if not at halftime. Ben stayed in the game in a 41-10 loss to the Bengals.

It wasn’t just Roethlisberger left in the game, but 32-year-old Cam Heyward and TJ Watt coming back from a hip and knee injury.  Heyward is the heart and soul of the defense and rarely gets a break in any game.  He’s often double-teamed.

The defensive captain asked if he wanted to stay in?

“Hell ya,” Heyward said.  “I’m here for four quarters.  You will never see me shy away from that.  I don’t care if a game is out of reach, there is a lot to be learned.  Whether you are trying to get back in the thick of things, or get your technique right.  If they allow me to go back out there, I will be out there.”

Roethlisberger explained that it’s more than just that game, although he did ask Tomlin if he wanted to take Najee Harris out.  Which he did.  Ben said it was the smart move.  He believes there are lessons to be learned from games like this.

“Games like this show a lot down the stretch of the game,” Roethlisberger said.  “It shows about a person, a team’s character, their will, their heart.  When you are down a bizillion points at the end of the game, do guys quit?  Do they stop fighting?  Do they give up a little bit or do they continue to fight and fight for each other?”

“I didn’t ask coach one time to come out.  There is a Steeler Way and it’s fighting to the end.  I thought for the most part we did that.  Guys showed their character at the end of games.  Who continued to fight?  Pat (Freiermuth) takes a crazy hit to the head.  People will say, why?  But it shows his heart and his character.  Diontae, the line up front, I thought a lot of guys did that.  Games like this is where it’s revealed.”

Despite the humiliating showing in Cincinnati, the 5-5-1 Steelers are not out of the playoff possibilities.  There are still six games left and half against division foes.  Why risk your starting quarterback in a meaningless game?

Roethlisberger said he could lead to something going forward.  First test of learning something from this game is Sunday hosting Baltimore.