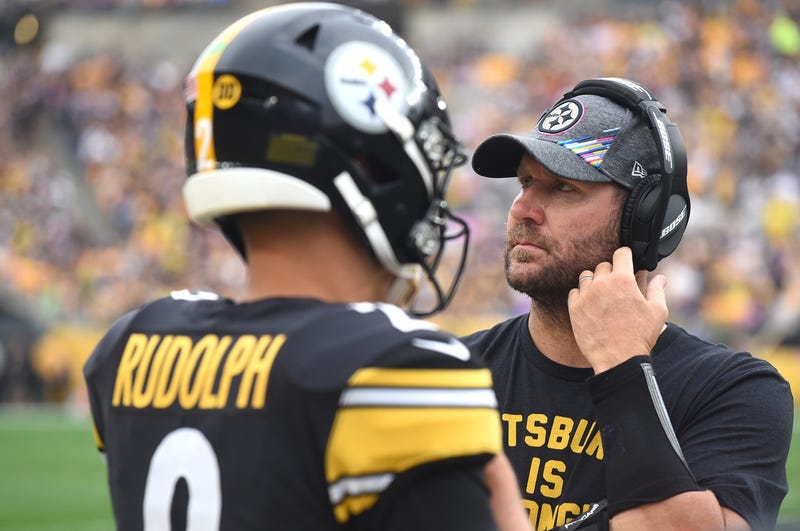 PITTSBURGH (93.7 The Fan) – One of the first things Steelers President Art Rooney said in speaking to the media on Friday was to publicly thank Ben Roethlisberger for 18 great years. That’s easy. Now he begins the process of replacing him.

“We certainly won’t close any doors at this point,” Rooney said.  “It’s early in the process.  There will be a lot of doors to open and look through.”

“Certainly we have Mason Rudolph and Dwayne Haskins on the roster.  Those two will be able to compete for the position.  We will be looking to put the best person at quarterback next year.”

What are the Steelers looking for in trying to replace a Hall of Famer?  Will they go internal?  Find the next QB in the NFL Draft?  Make a trade or get one in free agency?

“I think that you have to take advantage of whatever opportunity you have to get the best quarterback you can find,” Rooney said.  “You don’t always have the luxury to say you want A, B and C and go to the grocery store and order a quarterback.”

If that were the case everyone would have a good one, which the Steelers did for two decades.  Rooney said he’s not a scout, but does gather information and pay attention so he can be part of their discussions on possibilities.

“We will evaluate all of the options we have,” Rooney said.  “Certainly mobile quarterbacks are the wave of the future.  Having mobility at that position would be desirable.  The other thing that is desirable is somebody that can read a defense and complete a pass downfield.”

Steelers head coach Mike Tomlin reiterated in his news conference after the playoff loss, he wants mobility in his next quarterback.  How much mobility is a question.  Rooney did make it clear he isn’t looking for a 1,000-yard rusher under center.

“You start with someone that can buy some time, that would be desirable,” Rooney said.  “I would say in terms of having a QB that is consistently a threat to be a part of your rushing attack.  I’m not sure that is something I want to rely on, that you can rely game-in, game-out, season-in, season-out.”

“Having some mobility is important, the days of having quarterbacks that their biggest threat is running is probably not exactly what we are looking for.”

OK, cross off the trade for Lamar Jackson.  There is also the factor of GM Kevin Colbert retiring after the Draft.  Rooney said they will operate business as usual and likely won’t hire a new general manager until after they go through the first month of free agency and following their draft selections.

Rooney said it won’t mean Mike Tomlin will have more power, but how could he not since he will be there for the 2022 season and Colbert won’t.

“There are a lot of pieces to the puzzle you have to put together,” Rooney said.  “You don’t always get someone that meets every criteria you might want.  You just have to get the best player, plug him in and put the best players around him and try and put everyone in position to be successful.”