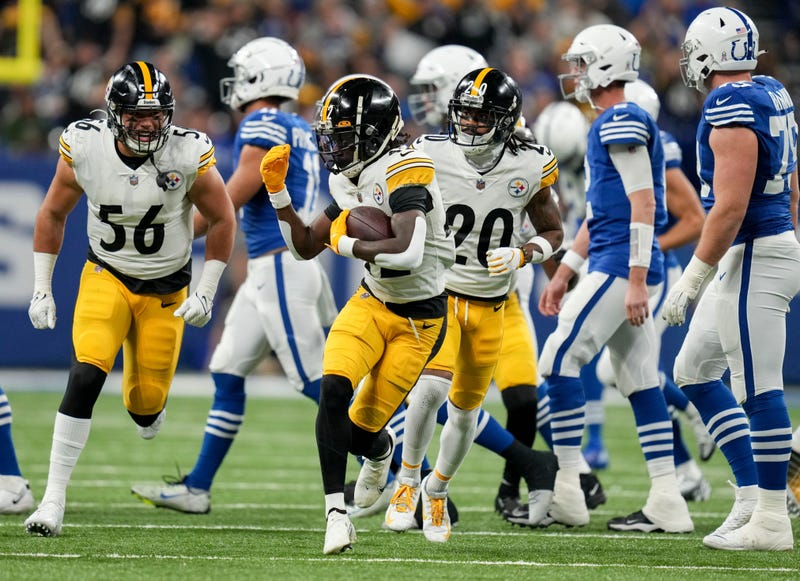 The Pittsburgh Steelers took on the Indianapolis Colts on Monday Night Football, beating them 24-17.

The Steelers got the game underway on a promising drive that resulted in a completed 45-yard field goal attempt by Matt Wright for a 3-0 lead.

James Pierre got the ball back almost immediately for the Steelers with a diving pick off one of Matt Ryan’s first throws.

The next drive off the interception would be spoiled as Kenny Pickett would get sacked twice by Yannick Ngakoue, forcing a punt.

Steelers out-gained the Colts 81-0 to end the first and started the second off on a 52-yard attempt knocked down again by Wright to increase the lead to 6-0.

The Steelers next drive was spearheaded by another impressive George Pickens catch on a 35-yard gain.

Najee Harris finished the drive by rushing to the end zone to make it 13-0 Steelers.

They would end the half by trading field goals before a second attempt in that span for Indianapolis would get blocked Isaiahh Loudermilk to end the half 16-3.

Dallis Flowers started the second half off with a bang on a huge 89-yard return for the Colts, that would eventually lead to their resurgence in the game.

Matt Ryan hit Taylor for a touchdown to make it a 16-10 game. The Steelers wouldn’t get much happening in their next couple of drives but recovered a fumble in the redzone to keep the Colts at bay.

Unfortunately, the Colts would get back to the redzone and capitalize this time with Ryan linking up with Pittman to give the Colts their first lead of the game right before the fourth quarter for a 17-16 game.

Pittsburgh responded in the begging of the fourth through Benny Snell Jr., who came into the game for an injured Najee Harris. The Steelers went for it on a 2-point conversion and sealed the deal with a pinpoint pass to Pickett to regain the lead at 24-17.

The Colts pushed hard towards the end of the game, but the defense was able to keep them at bay and secure the 24-17 win to improve the Steelers to 4-7.

Kenny Pickett ends his night going 20/28 for 174 yards and 32 rushing yards. Benny Snell Jr. had 12 carries for 62 yards and 1 touchdown. George Pickens had 3 receptions for 57 yards. Maulet, Edmunds, and Highsmith all racked up a sack on the defensive end.