Podcast Episode
Angelo Cataldi And The Morning Team
How confident are you in the Eagles?
Listen Now
Now Playing
Now Playing

“With the 15th pick of the 2022 NFL Draft, the Philadelphia Eagles select Nakobe Dean, linebacker, Georgia.”

Gonna need Nakobe Dean to be an Eagle.

Nakobe Dean would bring some much, much needed speed to the Eagles defense!!!#Eaglespic.twitter.com/BUTkWPD5b4

Nakobe Dean better be a @Eagles when the draft is over. #FlyEaglesFly 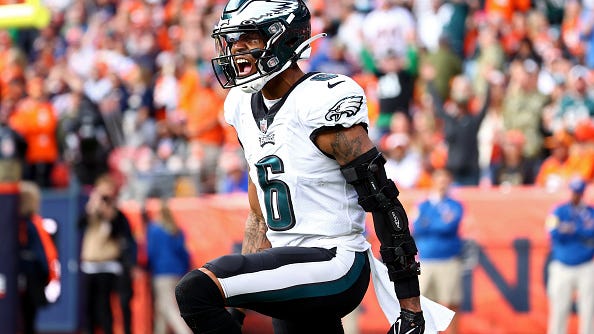 Dean, who was named a unanimous first team All-American and won the Butkus Award for being the nation's top linebacker in 2021, has ferocious speed.

Dean is projected as a mid first-rounder and tankathon.com even has the Eagles snagging him with the 15th overall pick in their mock draft.

Linebacker has been a position the franchise has not allocated a ton of draft capital to. In fact, Philadelphia has not drafted a first-round linebacker since 1979 when they drafted Jerry Robinson out of UCLA with the 21st overall pick.