Update at 4:54 p.m. ET: Lillard told the media after a USA Basketball practice that there aren't imminent plans to request a trade, but also didn't commit to remaining with the Trail Blazers:

It's not like the newest piece of reported news is going to make us talk about the Damian Lillard trade sweepstakes any more than we already have. Just look at our Damian Lillard topic page and you'll see reports regarding his potential future with the Philadelphia 76ers, Boston Celtics, New York Knicks, Golden State Warriors and others — along with a list of potential landing spots if he happened to request a trade. 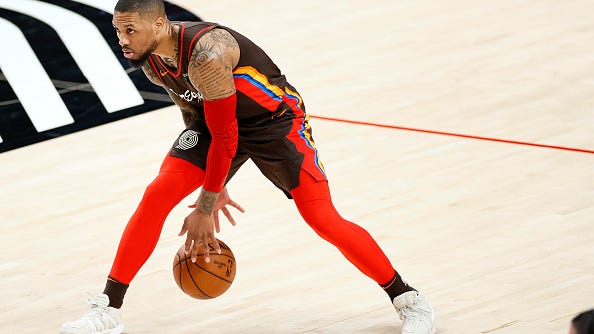 The story above, from two weeks ago, can now likely change from "if" to "when" based on the latest report. This time, it's True Hoops' Henry Abbott with the big announcement: Lillard will request a trade, and soon.

Source: Blazers star Damian Lillard to request trade in the days to come.

If this is a surprise, you haven't been paying attention. https://t.co/FS7KL1pPPm

Abbott also notes that some "well-placed sources" have counted out a Lillard trade due to the fact that he won't be a free agent until 2024, so he doesn't have all that much leverage, and that if Allen wants to sell the team, the presence of a star guard keeps the value up. However, Abbott feels as though keeping Lillard around and seeing the relationship between player and team continuously degenerate would be worse for the image.

In any event, should it become reality that Lillard does submit an official trade request within the next week or two, the trade rumors will absolutely fly, and very little would be off the table, you'd think, for a team in need of a franchise star. There's a reasonable argument to be made that there's no one in the entire league, period, that you want with the ball in his hands in a key moment in a game, and every title-seeking team knows how incredibly valuable that is.