Even Steph Curry had to put his hands on his head in disbelief.

Curry has made a habit of going off from 3-point land this season -- and hit another buzzer-beater -- but he wasn’t even the best shooter in the building Monday night. Warriors wing man Andrew Wiggins exploded by going 8-for-10 from 3-point range en route to 28 points in a 126-95 blowout of the Orlando Magic.

Wiggins had a huge smile on his face after knocking down his eighth 3-pointer with 3:48 left in the third quarter. I’m not an expert lip reader, but it looked like he told his teammates, “I’m hot! I’m hot!” as the Magic called a timeout. By that time the Dubs already led by 27.

With the bucket, Wiggins set a new career high in 3-pointers (eight) while the Warriors set a new season high with 18. Golden State finished with 20 threes, including 7-of-12 from Curry.

In the span of just 2:01 Monday night, Wiggins knocked down four trifectas and a free throw to bury Orlando with a personal 13-4 run. Even the greatest shooter in the world had to marvel at Wiggins’ salvo.

Wiggins is on 🔥 and Steph loves it

The big night bumped Wiggins’ 3-point percentage up to 41.6, which is far above his career best of 38 percent last year.

"I'm in a groove," Wiggins said. "I love my teammates. I love winning and right now we're winning. We're playing together on both sides of the floor. It's exciting to win."

“I’m in a groove. I love my teammates. I love winning, and right now we’re winning.”

If he can continue to be a consistent 3-point threat, that’d make the Warriors even more deadly on the perimeter. Add Klay Thompson into the mix with Curry and a reliable Wiggins? That will be a tough starting backcourt matchup for any team.

The 26-year-old Wiggins continues to progress in his third season with the Warriors’ organization. While he has still shown flashes of freakish athleticism this year (ask Karl Anthony-Towns), Wiggins is showing unprecedented accuracy from distance, too.

"I do think just catching and shooting is kind of simplifying the game, rather than catching and sizing the defender up and putting it on the floor and then rising up and shooting," Warriors coach Steve Kerr said. "I think there was more of that early in his career. I think the way he's playing is more efficient and more simplified."

Wiggins said playing in the Warriors' system alongside Curry and Draymond Green has also helped his offensive game.

"I just been getting a lot of shots up," Wiggins said. "Been working. One thing, being on this team, you play with someone like Steph, Draymond, they're going to get you open looks, good shots. I feel like in my whole career, this is the most open looks I've gotten. The most baskets I've got looking at the 3-point line, looking at the basket, just an open shot. This team, this coaching staff, they all make it easy for me." 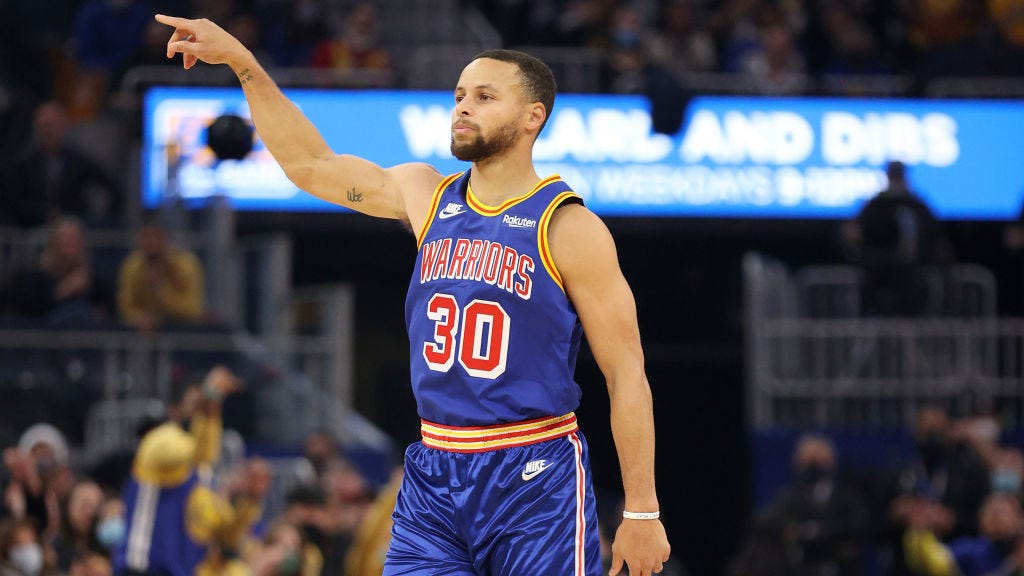 Another one: Steph Curry hits first-quarter buzzer-beater vs. Magic