It’s the first week of December, so any talk of the NBA Western Conference finals might be a bit premature. But the basketball world might have got a preview this week between the Warriors and Phoenix Suns.

Three days after getting worked in the desert, the Warriors responded with a convincing 118-96 win Friday to snap the Suns’ 18-game win streak.

Phoenix's leading scorer Devin Booker sat out with a hamstring injury and defensive whiz Mikal Bridges missed a few first-half minutes with a finger injury, but the Warriors cut down on turnovers and Steph Curry was unleashed to lead the offensive attack.

Defensively, Draymond Green led the charge as the Warriors held their opponent under 100 points for the 11th time in 22 games. That’s an impressive feat in today’s offensive-minded NBA, as the Warriors remain the league’s top team by defensive rating (99.7). Following the contest, Warriors forward Juan Toscano-Anderson said it’s hard to quantify the impact Green has on the team’s defense.

“He's what Steph is offensively,” Toscano-Anderson said. “It’s just not sexy. The average viewer doesn’t understand angles and being up to touch on the ball screen, sliding over, being the most important guy -- we call it the MIG, defensively -- trapping the ball, they don’t see that. That doesn’t show up in the statistics. We watch film all the time and I’m, like, ‘Damn, that’s impressive.’"

Warriors coach Steve Kerr had a feeling Green would turn in a strong performance. After Suns big man Deandre Ayton bullied the Warriors at times for 24 points and 11 rebounds Tuesday, he had a much quieter 23-point, six-board night on Friday that included 9-of-11 from the free-throw line.

"If we lose and he doesn't play well, then you know what's coming the next game," Kerr said. "He was motivated to play tonight."

“He’s the best defender in the world,” Kerr said. “He does everything for us defensively. He captains the defense, he’s the one directing traffic. He guards, guards on switches, he’ll guard Deandre Ayton and everyone in between and he’s all over the place with his help. I thought Draymond was brilliant tonight.”

As they’ve tended to do all season, the Warriors seized control of the game in the third quarter. They busted out of the locker room with major energy and pieced together a quick 9-0 run with 3-pointers from Curry, Andrew Wiggins and Jordan Poole that built an 11-point lead. The Suns never really flirted with the possibility of victory after that.

Phoenix flummoxed Curry Tuesday and held him to a season-low 12 points but they couldn’t keep a lid on him Friday. The Warriors superstar started off hot by splashing his first 3-point attempt and finished with 23 points on 8-of-20 shooting, including 6-of-11 from long distance.

The Warriors received massive contributions from their bench players like Toscano-Anderson and Gary Payton II on both sides of the ball, but Wiggins also had a nice bounceback game after trudging through Tuesday’s game with back spasms. Wiggins helped set the defensive tone early by taking on Chris Paul and finished with 19 points and five rebounds in 30 minutes.

Kerr said it felt nice to respond with a win over the Suns, even if it is early in the season.

“We caught a break with the Suns on a back-to-back, so the schedule played in our favor,” Kerr said. “But winning 18 games in a row is just incredible. We have huge respect for Phoenix, and what they’ve accomplished and what kind of team they’ve become over the last couple of years. And we know that we’re trying to catch them, not vice versa. We haven’t been in the playoffs for two years, so we’re trying to catch them and we know that they’re the best team in the West until somebody else knocks them off.” 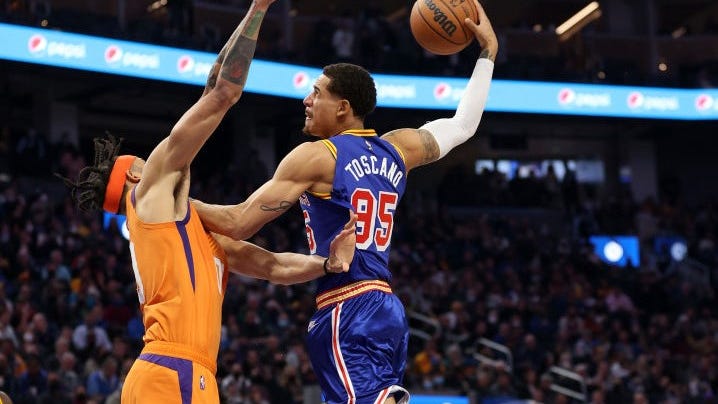