How many checks can Warriors owner Joe Lacob sign before running out of money?

The Warriors led the league with a payroll in excess of $340 million this season, about half of which was paid for in luxury taxes that will be distributed to low-revenue teams around the league. Golden State’s budget only seems like it’s going up from here.

Kevon Looney and Gary Payton II are the priorities when it comes to this summer’s free agent class for the Warriors. Jordan Poole also has an October deadline for a rookie contract extension while Wiggins is about to enter a $33.6 million final year of his max deal, and could have another max deal awaiting in 2023.

“It’s gonna go up,” Marks said of the Warriors’ salary. “Not even talking your two extension guys with Poole and Wiggins. With Payton and Looney – we started looking at the numbers, I think the Warriors have a right around $87 million tax bill without those two players. If you sign each guy (Payton and Looney) for, say, $10 million each, that number goes up to $200 million. It’s a $113 million price tag to bring both those guys up next year.”

Damn, that’s a lot of money. Those repeater luxury tax penalties keep piling up. Marks added that he thinks only Lacob and Clippers owner Steve Ballmer would pony up that kind of dough for role players.

As Marks noted, though, the Warriors have largely built their exorbitant salary due to homegrown drafted players, outside of Wiggins. Marks also gave a huge compliment to general manager Bob Myers, comparing him to the architect of the San Antonio Spurs dynasty.

“Bob Myers probably will go down with R.C. Buford as one of the greatest general managers out there,” Marks said. “As far as being able to build and sustain this roster.”

Marks said that the league’s low-revenue teams – who may be crying foul about the Warriors’ “competitive spending advantage” – are also getting about $10.5 million this season from the league’s luxury tax stream. Teams like the Warriors and Nets are the biggest contributors to the estimated $500 million pot, which will be distributed between qualified teams and the league in July or August.

“Between Golden State and Brooklyn, they’re funding a lot of these smaller markets here,” Marks said. “It’s under their discretion as far as what those teams wanna do with it. They can pay for their coaching staff for the whole year here.”

So, how much is the 26-year-old ironman Looney going to command on the open market after his career year? He played all 104 games and established himself as a “championship center” in the words of coach Steve Kerr.

“I would just say that centers don’t get paid these days, unless you’re (NIkola) Jokic or (Joel) Embiid, or one of these marquee guys,” Marks said. “Even guys like (Jusuf) Nurkic with Portland. We’ve see the value of centers be in that $10 to $12 million range for a starting center. I think there’s some separation between (Jonas) Valanciunas guys like that, a $12 million guy. I don’t see a team like Charlotte going out and spending – maybe they offer him the ($10.3 million projected) mid-level (exception).”

Payton made the Warriors as a non-guaranteed contract player on opening night this past season, but he’s about to get a big raise this summer. The defensive stopper and high-energy NBA journeyman is 29 but renowned for his freakish athleticism.

“He’s got early bird rights, meaning Golden State can pay him up to $10.9 million,” Marks said. “Thing is it’s got to be for a minimum of two years. The mid-level exception – which the majority of teams will have – will be around $10 or $10.3 million. It’s for me to think that a team goes out and pays Gary Payton more than that. Four years, $48 million – it would have to be one of these cap space teams, whether it be Detroit or Indiana or San Antonio or Orlando, maybe Portland. It’s hard to think they have an appetite at that number.

“For Gary, hey, he’s not a minimum guy anymore, I think we can all agree on that. I think it’s just a matter – is he an $8 million guy, is he a $10 million guy? Is Golden State comfortable playing him $10.5 million here or $10.9 as much as they can spend? I think it’s probably shy of where that mid-level number is.”

Marks also said other teams might be wary of signing Looney and Payton despite their big contributions this past season.

“They fit what Golden State does and they know their role,” Marks said. “When you ask them to do a little bit more, they might struggle.”

As for Poole, Marks also gave a ballpark estimate for his extension figure. Poole just turned 23 and finished off his third season with a bang, rattling off 20-plus points in 17 straight games at one point and making contributions in the Finals.

Though Poole’s deal would be negotiated this year, with Marks expecting an announcement near training camp in October, the money wouldn’t kick in ‘til the 2023-24 season.

Looking around the league, Marks made some Poole comps, including the Phoenix Suns' Mikal Bridges (four years, $90), Boston Celtics' Jaylen Brown (four years, $107 million) and Tyler Herro, who could get four years, $95 million from the Miami Heat.

“So is there a number around there in that $21, $22 million that you’re comfortable?” Marks said. “That’s starter-type money for a guy coming off the bench.” 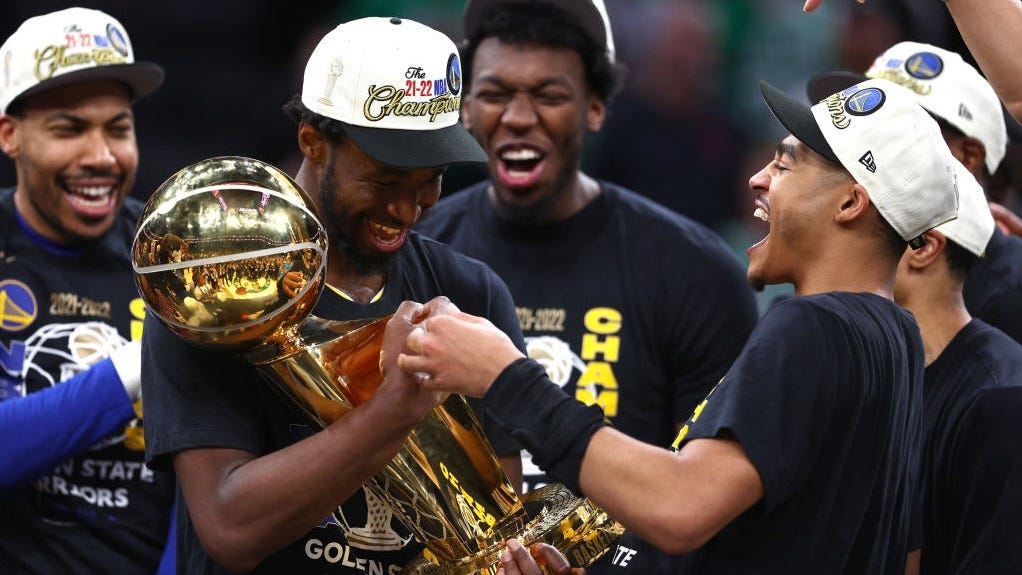