Just as the Warriors were starting up training camp in October, still basking in the championship glow from June, longtime NBA reporter Ramona Shelburne got to ride on The Bay with Captain Klay in boat.

On Wednesday, ESPN published Shelburne’s insightful feature on Klay, in which he bared his soul and all the emotions that are tied to his ongoing efforts to reclaim his pre-2019 form. Shelburne joined 95.7 The Game’s “Willard & Dibs” on Thursday to peel the curtain back on her story and give her thoughts on the state of the Warriors’ two-timeline approach as the defending champs’ record sits at 6-9 through 15 games.

As Shelburne detailed in the feature, Klay has a true love for the nautical nature of boating.

“My favorite thing about it is he does all his own work,” Shelburne told hosts Mark Willard and Dan Dibley. “He doesn’t have a deck crew. He’s not hiring people to drop the anchor – it’s not like the (reality) show on Bravo (called Below Deck) – he really is Captain Klay.”

In the weeks since Shelburne did her reporting, Klay has descended into arguably the biggest rut of his career. Through 15 games, Thompson is shooting just 35.1 percent from the field and 33 percent from 3-point land. Many of his misses have clanked off the front of the rim as he regains his legs following the offseason and early-season minutes restriction dictated by his previous ACL and Achilles injuries.

Klay’s pride has been on display throughout – whether it be through his back-and-forth with Charles Barkley or his “four rings!” exchange with Devin Booker before his first career ejection last month. Thompson told Shelburne that if he could even be 90 percent of the player he was in 2019, he’d be ecstatic, but he appears to be nowhere near that threshold right now.

“I think for Klay, it’s less about getting in a zone and really letting go of everything in life and being able to be completely focused on playing basketball,” Shelburne said. “The way he does that is through movement. He’s incredible at just keeping it moving. Moving, moving, moving – the guy does not sit still. For two years, two-and-half years, he had to sit still rehabbing his injuries. He learned a lot, he’s stronger, but his nature and the way he tends to work through any kind of pressure or anxiety he’s feeling is through movement.”

As Steve Kerr told Shelburne in her article, the Warriors know they’re in the "final stages" of their run with their current Dynasty Dubs core – that also features Steph Curry, Draymond Green and to a lesser degree Andre Iguodala, who is yet to appear in a game this season. Dating back to last season, when Jonathan Kuminga and Moses Moody had intriguing rookie years, Warriors brass has openly touted its two-timeline approach.

Ideally, there will be a smooth transfer of power to players like Andrew Wiggins, Jordan Poole and the youngsters, including center James Wiseman, who is currently in the G League. That passing of the baton has been put in doubt with this year’s slow start and minimal production from the young guns.

“I personally think keep up with the two-timeline thing and have patience,” Shelburne said. “To quote the Sixers, you have trust the process. This is your plan. It doesn’t always go in a straight line, it doesn’t always go smoothly. I think you have to find a way to trust it. Unless there are some huge red flags that you see. There’s some huge red flags? OK. But I haven’t felt that or heard that. I think they’re just experimenting and growing, and it’s a little clunky right now.”

Everyone knows that the Warriors player payroll is set to balloon in excess of $500 million next season – a steep hike from its current figure of $360 million. Shelburne thinks the Warriors will hold off on making any major moves to shake up the franchise and will ride it out this season.

“I wouldn’t do anything this year,” Shelburne said. “Maybe after the season if it's really not working out, it’s gonna get real expensive, that’s when you need to look at that. Just remember how young James Wiseman is (21 years old). He’s so young. You looked at Jordan Poole at the same level of experience, you would say the same thing – ‘What do you see in this guy?’ Gotta let him play. Gotta let him keep learning and growing and developing. He’s such a young guy.

“I know it’s hard because LaMelo Ball is out there and Anthony Edwards, they’re already kinda deep into their career and all that, but you gotta try with these new guys. With James Wiseman and Moody and Kuminga, they’re just scratching the surface here. At the end of the year, maybe you have a long enough sample size. Maybe you feel like you’ve seen enough and you can evaluate them all.” 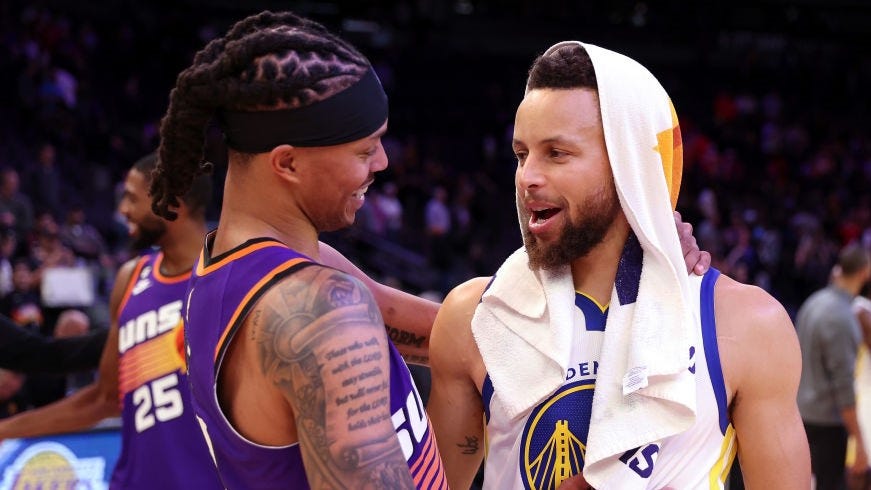