Just when the 49ers seemed to be at full strength and humming, two of their top stars have been declared out for Week 13.

“Strains usually [last] anywhere from 1-2 weeks, which I think was very good news considering what it could have been,” Shanahan said.

Shanahan said he hopes both players are able to return for Week 14 against the Cincinnati Bengals.

Samuel is off to an unprecedented start this season as the first player in NFL history with at least 1,000 yards receiving, five receiving touchdowns and five rushing scores. The wideout has been lining up in the backfield the past three weeks with great results -- including two more touchdowns against the Vikings -- but pulled up lame while trying to leg out a sweep on Sunday.

The 49ers need to continue to be careful with Samuel’s touches, even though he is explosive in the backfield, productive and willing to carry the ball. Samuel told Shanahan the injury feels similar to the groin pull he experienced in Week 6 in 2019, which held him out for one game.

“Hopefully it plays similar to that,” Shanahan said. “He’s been a big part of our offense, but I think we’re in a spot right now that we can overcome that.”

As Shanahan noted, running back Elijah Mitchell (broken finger) returned in Week 12 to help a humming rush attack, while receiver Brandon Aiyuk continues to ramp up his production after a slow start to the season.

Warner has been a prime example of durability since the 49ers drafted him. Sunday will mark the first time in 60 career regular-season games that Warner won’t suit up. While Warner was recently critical of his performance, he remains a key anchor in the middle of the 49ers defense and its leading tackler (55 tackles).

Linebacker Dre Greenlaw is also day-to-day after experiencing some irritation in his core. Greenlaw missed nine games this season with an injury to the area, so the 49ers will be monitoring it closely this week.

Defensive lineman Kentavius Street is day-to-day with a wrist strain, linebacker Marcell Harris is in concussion protocol and running back Trey Sermon is expected to be “out for a little while” after suffering a “pretty bad” ankle sprain, per Shanahan. 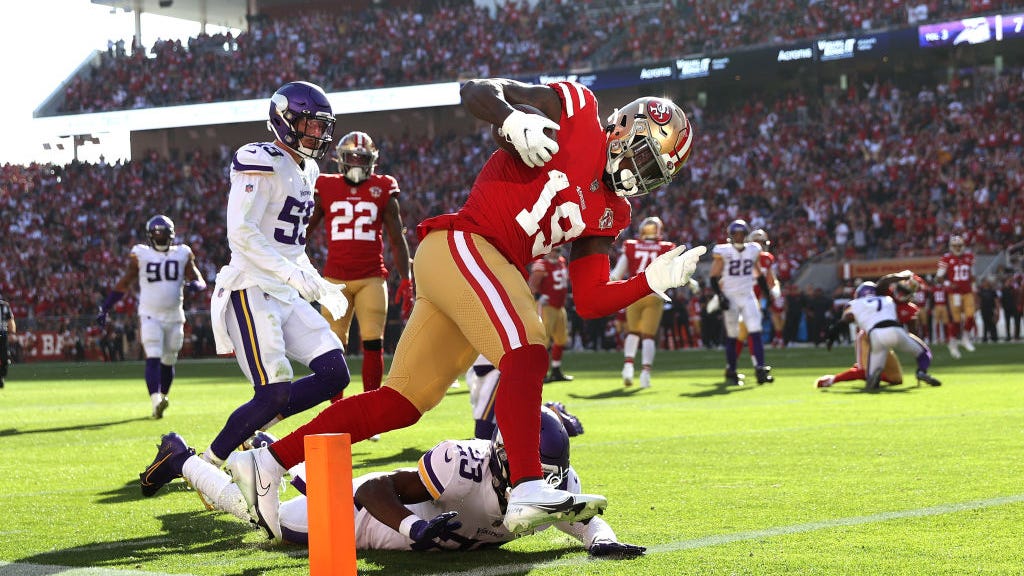 Deebo Samuel has already made NFL history this season