Generally, there’s nothing major to take away from offseason workouts. But the last few months might ultimately prove to be the stretch of time that resulted in Trey Lance getting the keys to the 49ers offense.

It has been widely expected that San Francisco would trade Garoppolo this offseason. The Niners used the third overall pick in last year’s draft on Lance, and Garoppolo is entering the final year of his contract.

But Garoppolo underwent surgery this offseason and has yet to throw, bringing his trade market to a halt. Not only that, but it didn’t allow for him to take part in the 49ers’ OTAs and minicamp.

Apparently, Garoppolo’s absence has allowed for Lance to separate himself.

"The Jimmy thing is fascinating because back in February at the combine, I was talking to everyone there and they were like oh he’ll get traded," NFL Media's Peter Schrager reported Wednesday during an appearance on the "Pat McAfee Show." "The surgery completely threw a corkscrew in this whole thing. No team wanted to trade for a quarterback coming off of surgery without having their eyes on him. And the Niners don’t want to trade him for 20 cents on the dollar, which is what essentially they would have to do. Now we’re at the point where Jimmy needs to start throwing, he has not been with the team, for the most part when he’s been training he’s been in Southern California.

In the event Garoppolo still is with the 49ers when camp opens, then this all could change. Maybe Garoppolo shows up and is totally healthy and can prove that he still gives them the best chance to win.

Either way, the strides Lance is said to be taking should reassure the 49ers, and it ultimately might make it easier to just trade Garoppolo, no matter how well he comes out the other side of his rehab. 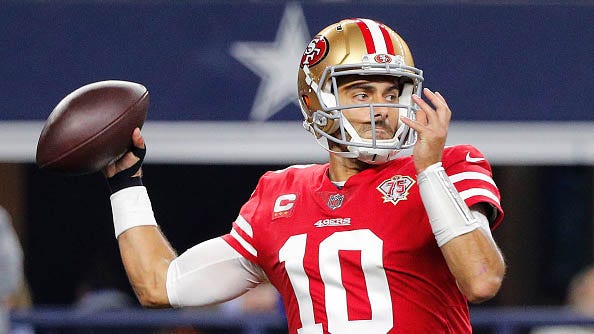 Kyle Shanahan: Jimmy Garoppolo will 'most likely be traded, but who knows?'