Being “sticky” is a good thing if you’re Samuel Womack. That’s how 49ers defensive coordinator DeMeco Ryans described Womack earlier this week and the rookie cornerback showed why in Friday's 28-21 preseason win over the Green Bay Packers.

Womack snagged two skillful interceptions for the rabid 49ers defense that forced three takeaways friday. In the process, the fifth-round pick may have vaulted to the front of the line in the team’s open competition for a nickelback.

Flying under the radar is nothing new for Womack, who arrived in San Francisco with little fanfare. But we might look back on Friday night as his coming out party. Womack had to walk on at Toledo, where he became a disruptive force in the secondary. The Niners drafted him to be a ballhawk and the 5-foot-10, 189-pound Womack delivered in his preseason debut.

“I feel like I had a great game tonight,” Womack said. “I still have stuff to learn from and get better at, but I feel like I was taking advantage of my opportunities.”

Looking around San Francisco’s defense, which has been hyped throughout training camp, it appears nickelback may be the only unsettled question. Veteran Darqueze Dennard was the first nickelback in the game Friday and was listed as the top option on the depth chart entering the contest, but coach Kyle Shanahan might have to pencil Womack with the No. 1s for next week’s game against the Minnesota Vikings.

“I play all around on the back end,” Womack said. “They can put me at corner, put me at nickel. I can play it. It’s really on them and they’re decision, knowing where they wanna put me. … This is who I am. I grind, I’m humble, I take every day, day-by-day and I just  work for what I get. It didn’t matter what team I was gonna end up on, I was gonna take advantage of my opportunities whenever they came.”

Womack showed nice ball skills on his first pick, when he tumbled to the ground with Packers wide receiver Romeo Doubs but wrestled the ball away for an interception early in the second quarter. After a review, the refs determined Womack picked the ball.

Challenge accepted 😤 @SamW0mack with the takeaway.

During his second interception, Womack clung to Packers wide receiver Amari Rodgers in the slot, running his route step-for-step before nabbing the pass from Jordan Love.

Asked to choose his favorite interception on the night, Womack couldn’t.

“Both of ‘em,” Womack said. “I couldn’t really decide which one was better.”

Womack wasn’t the only rookie to make a good first impression Friday, as wide receiver Danny Gray also hauled in two catches for 99 yards, including a 76-yard touchdown from Trey Lance when he tightrope-walked down the left sideline before scampering into the end zone. Gray also created nice separation from his defender in the second half, breaking off a 23-yard catch on a well-executed deep in route.

After his TD, Gray got mobbed by his teammates, who got their first glimpse at his in-game speed.

“They knew I was fast,” Gray said. “Everybody just came up to me, like, ‘Man, you were blazing. You were fast. You burnt ‘em.’ I got a lot of love for my teammates.”

“It’s very good,” Gray said. “Me and Trey get the work in after practice. We throw the deep balls and throw the ones we miss. I feel like everything’s coming together and we’re gonna be very special.”

Fourth-round pick Spencer Buford also played into the third quarter at right guard and got some valuable reps, showing off his strength by throwing down a rusher at one point.

It wasn’t all good for the rookies, though, as second-round pick Drake Jackson had to leave in the second quarter due to a shoulder stinger. At one point, Jackson did pressure Love and force a bad throw while lining up on the edge with the second-string defense.

The Niners finally have some game film to break down for their rookie class, and Womack and Gray should stand out when they go back and look at the tape. 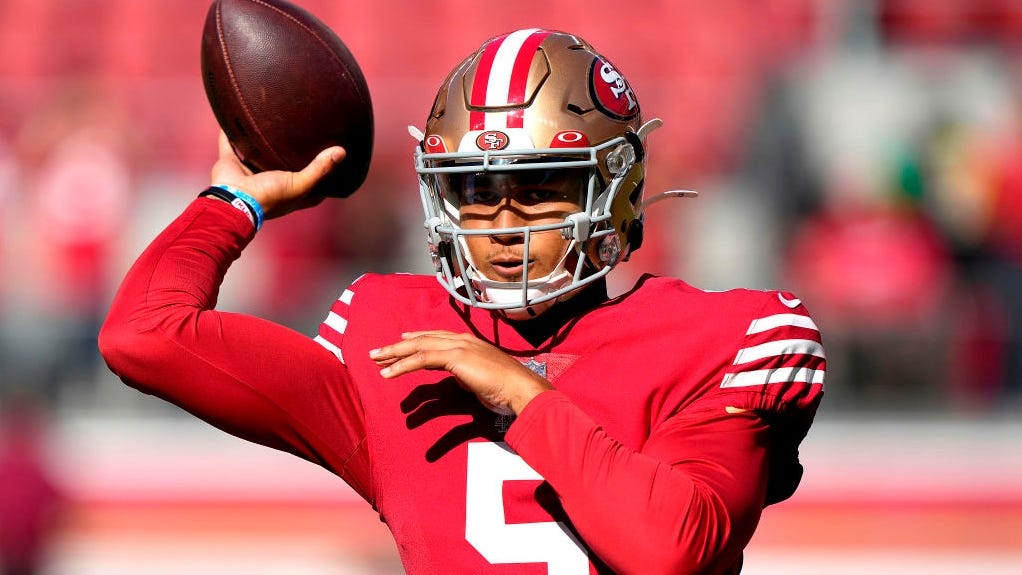