To celebrate the anniversary of the first film hitting theaters in 2001, Tom Felton has revealed fans may soon see a reunion of the original cast.

“It’s the 19th-year anniversary on November 14, so I’m planning some sort of digital celebration,” the 33-year-old told “Entertainment Tonight.” “I’m trying to wrangle all the oldies back together again to celebrate the achievement, really.”

While he didn’t disclose if Daniel Radcliffe, Emma Watson or Rupert Grint had confirmed their involvement, Felton did share he recently spent time reconnecting with some of his co-stars.

“I saw the Weasley twins [James and Oliver Phelps] the other day,” Felton added. “We went out to play some golf. Always chatting with a lot of the other guys on WhatsApp and staying in touch with them and making sure everything’s alright.” 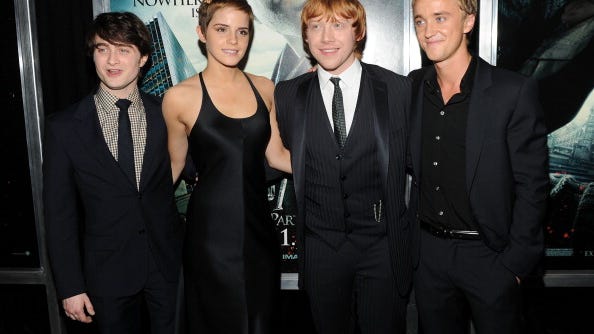 And as for playing Harry Potter’s rival Draco Malfoy in all eight films, Felton said he’s appreciative of how much support the character continues to get from fans.

"He has so many layers, he's misunderstood, he's also a bit of a git," Felton said of the house Slytherin character. "He needs a hug really. I think maybe people feel sorry for him, he needs a bit of affection. Either way, I'm highly flattered and intend to do my best to satisfy that desire."

Until a virtual reunion surfaces, fans can enjoy going down memory lane by rewatching all the films in the franchise.

After initially being available on HBO Max in May, the streaming service pulled them down after three months.

Peacock has since acquired the franchise and is offering all eight films for free during the month of October.